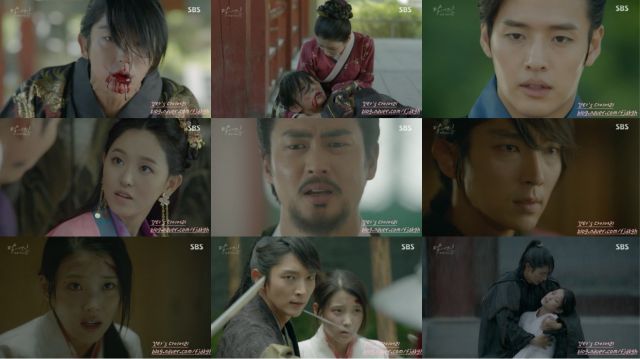 Prince So's solution to the assassination plot against his brother was, as we see recapped at the beginning of this episode, rather needlessly dangerous. It was only through sheer force of will that Prince So was able to prevent an immediate crisis from breaking out. The actions of the other actors in the carnival of Goryeo politics render that sacrifice meaningless anyway, even if for another day, Prince So is able to save his brother. But is this really a sustainable plan?

The answer to that question is, of course, obviously not. Freaked out as Soo is by the supposedly inevitable royal massacre, time and again it's hard to see any other plausible outcome to the constant plotting in "Scarlet Heart: Ryeo". As usual the historical perspective is fairly interesting. The drama actually presents a pretty good political argument against polygamy- the surfeit of available princes provides some fairly perverse backstabbing incentives for just about everyone.

But on the more emotional level, the character contrast has more emphasis. Prince So knows that he lives in a genuinely vicious time period, and his generally desperate efforts to rise above that are reasonably inspiring. It is unfortunate that most of the time the only plan Prince So can come up with to solve problems is mass murder, but he's a man of limited skill sets, all of them related to being a tough guy.

Elsewhere, Prince Wook is more of a sweet, affectionate smart prince, who is obviously more in tune with Soo's modern sensibilities. Unfortunately, when faced with a similar ethical dilemma as what Prince So deals with on a regular basis, Prince Wook is forced to make a similarly bad choice. The issue is not intent. Whether Prince So or Prince Wook want to be a nice guy is besides the point. There's simply too many members of the royal family hanging around and no good way to get rid of them except through murder.

I'm perhaps being a bit overdramatic, since no royal family members actually die here. But other people do, and this is an intriguing ethical issue. Soo, too, is forced to realize that the only way to save the royal family is by sacrificing lesser palace staff as scapegoats. This is no more morally tenable, because even if Soo herself can expect a rescue, no one else can. That's a big helping of reality that can't be ignored by anyone going forward.