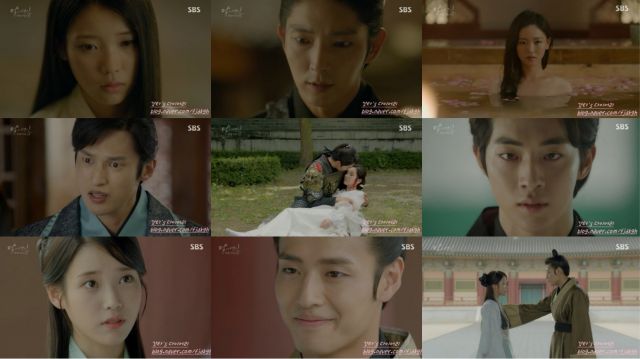 Soo is really upset at King Gwangjong for killing people, apparently having forgotten that King Gwangjong was killing people all the time even back when he was still Prince So. One flashback even goes to the trouble of reminding us that Soo herself was at one point fairly freaked out about Prince So's stone cold demeanor. What's more, apparently everyone's high opinion of Soo's random utterances were enough to permanently poison the well against Prince So and make all this bad stuff inevitable. Somehow.

"Scarlet Heart: Ryeo" runs its usual trick here of trying to pull of massive cathartic storyline resolutions based off of characters and situations that were thinly developed in the first place. The result is conspiracies that I'm not sure whether they're intended to be over-elaborate and complicated or whether it just seems that way because of the drama's rushed storytelling style. King Gwangjong seems to have barely any agency over what happens in his own kingdom, instead getting swept up in other characters' complex plots.

The most comically out-of-nowhere which being the fate of Baekje. Remember Baekje, the southwestern kingdom which was conquered shortly before "Scarlet Heart: Ryeo" began? Woo-hee is a princess of Baekje, and that's about as much explanation as we ever got for that particular political situation. In general I've found Woo-hee to be a baffling character- given the drama's penchant for solving problems with political marriages, it seems like Woo-hee could have served the same role for Baekje and instead...does something really stupid which somehow fixes everything.

That's a word I seem to use a lot with this drama- "somehow". Even when clear explanations are offered for character actions they're often tremendously unsatisfying. That's mainly because the drama lacks anything in the way of an effective overarching plot. Once again, the fact that Soo is a time traveler has no apparent relevance to anything, and the decisions she makes here are entirely self-interested, as if her only real concern this whole time has been to get an ideal boyfriend.

This is not necessarily an inherently bad goal to have, but the brief flirtations "Scarlet Heart: Ryeo" has with epic storytelling always end up with me wondering why the pay-offs are always so unsatisfying even as they are suitably highly dramatic. It might just be a matter of presentation. The soundtrack in this drama truly drives me nuts- it's always either horribly anachronistic or horribly clichéd. Sometimes it's both, and that's never a good feeling.