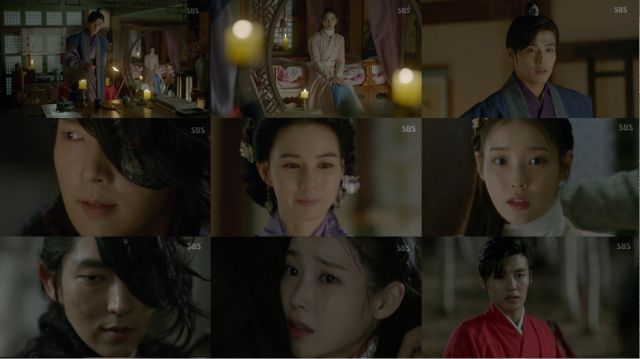 At first, it seems like it's finally starting to dawn on Soo that Goryeo is a pretty vicious world. Then the danger passes and she's mostly back to her normal happy-go-lucky self, even if the neck scar is a constant reminder as to what will happen if she steps out of line again. The attitude is actually rather oddly appropriate- everyone else in Goryeo has to deal with the prospect of death on a constant basis, but if they worried about that twenty four seven there'd be no time for sexy bath parties.

"Scarlet Heart: Ryeo" seems a lot a more interested in character study than it is in working dynamically to move the story forward. Oddly enough I'm actually OK with that, because the drama consistently looks so beautiful it's easy to get lost in the visuals. That and the whole "who is that guy" element. Every time a prince shows up on screen I find myself wondering not just who he is in the context of the story, but which pretty boy actor is portraying him.

Aside from the expected silliness involving the brothers pulling pranks on each other (more vicious the older they are), the real main character in focus is Prince So. As the male lead he is, practically by definition, Soo's love interest. Yet so far Prince So is consistently too terrifying to really register as anything except, well, except the guy who was willing to let Soo die right in front of his eyes just because it gave him an edge in an on-the-spot interrogation.

This is especially pointed because unlike all the other brothers, who in typical harem fashion contrive excuses to hang out with Soo, Prince So is actually working. And if there was any doubt before whether Prince So was really as savagely brutal as his reputation has implied, this episode makes it crystal clear that the rumors are true. The question is not whether Prince So can kill with impunity. It's whether he's in the mood for it at any given moment.

While all of this makes for great watching in the moment, the lack of depth is getting increasingly difficult to ignore. This drama goes to a great deal of effort to exposit some pretty standard genre tropes. Still, for now at least, the excess of style is enough to put me in a forgivable mood over the comparative lack of substance. The plot may be simple, but at least it's not stupid.