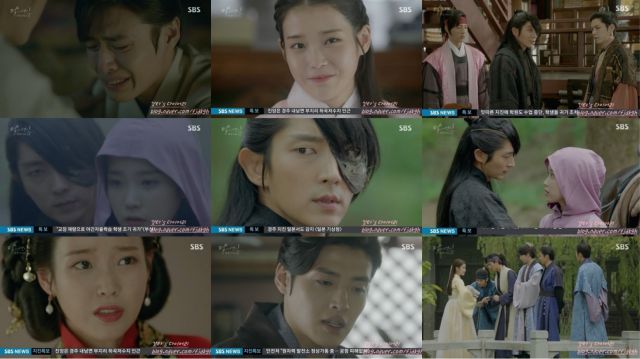 I'm having trouble grasping how much time has progressed in "Scarlet Heart: Ryeo". Last episode had all this beautiful winter scenery and yet this episode there's...none? Does that mean that Soo has been in Goryeo for several months? Because it sure doesn't feel like it's been that long. Mainly this is a consequence of the story having slowed to a crawl, as politics take a backseat to everything revolving around Soo for no good reason.

The crisis in question is very episodic. I suspect it could have been removed completely from the story with no significant long-term changes having been affected. This isn't a bad thing, for the sake of a breather or a change in routine, but then that's the whole problem. There's all this cool stuff going on in the background of "Scarlet Heart: Ryeo" and Soo is, as far as all the other characters know, just a normal courtly servant. Why does she warrant such special attention?

IU can act as generally cute as she likes. At the end of the day, I'd like Soo much more as a protagonist if she actually did stuff or showed complex emotional reactions. So far her main apparent purpose has simply been to be liked by the princes. It's also worth iterating that the time travel aspect of "Scarlet Heart: Ryeo" has to date, been horribly underused. Aside from Soo's obviously anachronistic personality there's no indication that she is from the future and possesses skills normal Goryeo people do not.

Except when it comes to emoticons, of course. I will admit that "Scarlet Heart: Ryeo" is reasonably entertaining when it comes to silly comedy. The puppet show was pretty fun, too, even if it does rather beg the question of what exactly the princes do all day. Goryeo isn't a modern monarchy where princes live large on the government dole. Back then royalty were expected to work for their keep, not chase skirts.

Alas, any hope for a more interesting, dynamic plot is going to have to wait until the next episode. I really do hope we're going to get more of Prince So. He's easily the most interesting character because there's all sorts of mysteries swirling about the guy, and it's clear that Prince So himself doesn't know what's going on with half of them. Contrast that to Soo, about which we know pretty much everything and who is, consequently, a tad boring.