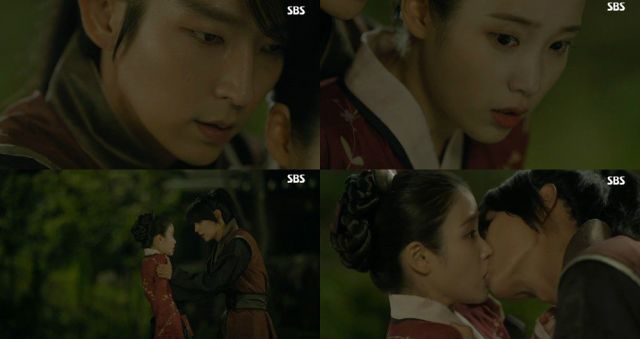 As usual Prince So doesn't have that much screentime. But continuing the trend from last episode, "Scarlet Heart: Ryeo" very effectively manages to drive up the tension by making nearly everything the other characters do be a reaction to Prince So. While poor Prince So himself is fairly oblivious to most of what's going on, it's very easy to see what brings on his bad moods. Even when Prince So does good, people are too terrified over his very existence to act all that grateful.

Soo's prophetic visions are the worst of this, since up until now she was the main person boosting Prince So's confidence and now, for reasons Soo won't explain, she's pushing him back. The time travel element finally gets some decent play here, too, although strictly speaking Soo isn't using future knowledge so much as she is relying on apparently magical precognition. Much of the normal time travel ethical problems are also rendered rather moot by how limited Soo's knowledge is. Goryeo is ancient history, and I'm surprised she can remember any names at all.

But this kind of big picture thinking is exactly what has made Prince So's life so miserable. He got shoved off as a hostage because a prince was needed as hostage and Empress Yoon already had a higher ranked son. Prince So is constantly just moved around like a piece on a chessboard, his own feelings being considered completely unimportant compared to his familial obligations.

It's no wonder the guy is so frustrated when we look at the brothers hanging out together having a good time. The wedding scene is great precisely because it shows the way family is supposed to work. The brothers are being friendly, jovial, and generous not because they're expecting some sort of reward, but because they're genuinely happy that even the dumbest most useless Prince can find happiness. Prince So clearly likes his half-brothers much more than his actual family.

So how do we square this with Soo's visions? I'm inclined to thinking and hoping that there's more going on here than the limited hints we've seen so far. Considering how this episode clearly indicates that Soo is not the only person to have undergone a time slip, it's entirely possible that the disjointed nature of the story really is just a matter of Soo being kind of dumb. In any case, "Scarlet Heart: Ryeo" is finally tackling its most interesting mysteries, so the overall viewing experience is now at a dramatic improvement.