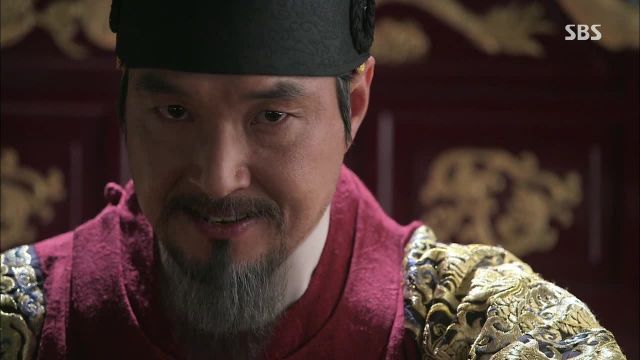 The relationship between Seon and is father is both simple and twisted. It guides this episode through the political game played. As it journeys through the obstacles of palace life, politics, and years of fearful living, it has difficulty remaining pure and true as this episode proves. As a result, Seon's heart is broken yet again.

There is a certain point when all of the heartbreak that Seon suffers is going to break down his spirit. This episode pushes him further because it spends a majority of its time building up the fractured relationship between the king and Seon, only to tear it down when the king is, yet again, consumed by greed. Watching father and son spend time together, enjoying their relationship, working together, is beautiful. It's simple - a pure familial bond that has seemingly survived the harsh wilderness of palace politics. Seon enjoys it so much that he spends most of this episode lit up like a happy child whenever he is with his father. Even the king is pulled away from the greed that has consumed him by the sweetness of his paternal bond. Part of him fears losing his son. But the larger part snaps when his crown is threatened, and that severs the thread of happiness that connected him to his son. The break is difficult to watch. The king is consumed by a frenzied madness and the prince, once again, suffers massive heartbreak.

The reason Seon had time with his father is because the enemy was in the process of regrouping. A greedy Soron minister throws himself into the political frenzy by publishing the diary of an artist that documents the king signing the secret document that earned him the crown by sacrificing his uncle. While this is a wonderful twist to the story, revealing the king's filthy laundry, it is a bit cliche when it is Ji-dam's father who publishes the diary. But I will run with it and say that Ji-dam's father knew of another incident that surrounded the corrupt takeover of King Yeongjo. That fact proves that it wasn't just the secret document that was twisted, but there were many more incidents surrounding it that culminated in the creation of the document and Yeongjo's bloody ascension to the throne. Oftentimes dramas only focus on one incident and forget to include the complications that have a hand in shaping events. "Secret Door" did not do this, which was wise.

Ji-dam's father had a larger role in this episode than she did. The romance has been on the back burner, I suspect because of the fifteen year age discrepancy between Lee Je-hoon and Kim Yoo-jung. But even if the romance wasn't sizzling, the show still could've involved her and made her a more engaging character on par with Kim's significant acting prowess. The inclusion of Ji-dam's father into politics puts her in the line of fire, which will draw her in, but it doesn't overlook the fact that she has been neglected thus far.

Watching Lee Je-hoon as Seon is one of the largest joys of "Secret Door". He can build up a moment and burst it in seconds. When Seon is gravely disappointed by his father, that disappointment morphs into fury and Lee Je-hoon's portrayal of Seon's anger mirrors veteran Han Suk-kyu's immense presence. The battle between the two men who are heartbroken is no easy thing to portray, and yet Lee and Han handle it with finesse. It is a driving force in "Secret Door".