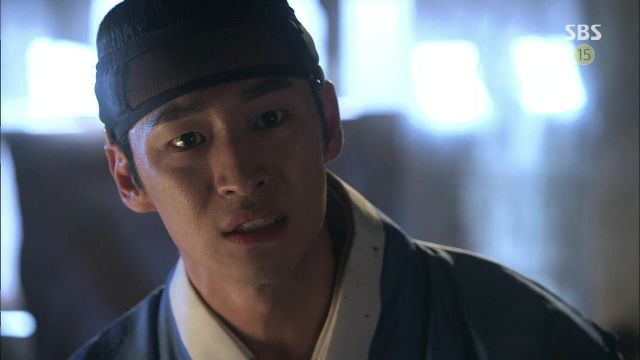 What makes "Secret Door" such a rich drama is how is plays up both sides of every situation and every relationship. A murder mystery that could've been solved in two episodes span five as people insert themselves into the investigation, using it to achieve their own ends. It is not only an investigation, but a political vehicle. Or the relationship between father and son. King Yeongjo loves his son as a father, but as a king he sees Seon as a threat. It's a rich dichotomy that keeps the world of "Secret Door" full of intrigue.

The twisted relationship between father and son is a favorite part of the show. It's an incredibly layered and complex relationship that, at its core, is based on the love between father and son. However, their social positions as leaders of Joseon mold the familial bond into something much uglier. While the king loves his son and wishes him the best, he is also terrified of the threat that his son poses to the throne. The king plays a precarious balancing act between his natural tendencies as a father and his desire for power that he believes is necessary to rule his nation. What colors this further is how volatile the king is. He can shift from raging fury to placid kindness in a heartbeat. This unpredictability can wreak emotional havoc on those around him, especially on Seon.

Perhaps part of what made the king this way is the fear that he has lived in for most of his life. Minister Kim, leader of the Noron faction, threatened his life and has kept an iron grip on the king and his politics for thirty years. That is a long time to live in fear. But the king also has dreams of a well-functioning government that has been stifled by the Noron control. He needs to be free of the Maenge, the document that ties him to the Norons and gives them power over him. Behind the murder mystery of "Secret Door" and the misery Seon suffers is the Maenge, the document everyone is desperately trying to hide or find. Having a central cause for misery creates an interesting ripple effect that the writer uses to the plot's advantage. Everyone, from the prince's personal guard to the princess, wants to use the Maenge to up their power.

Women at this time didn't have the kind of power men had. They had to play a different game, which is what Princess Hyegyeong does. She uses her father to gather political information and to make political moves. She tries to control Seon's inappropriate behavior because his standing directly affects hers. She verbally battles with the king's concubine, Lady Moon, over ranking. It's a subtle game she plays that has to be all behind the scenes, but she needs to be more clever than the men to play it. Child bearing also provides power to high-ranking women, especially if they bear sons. That is an advantage Lady Moon has over Hyegyeong - she is pregnant.

Ji-dam is an interesting woman because of her courage and keen mind. It is why Seon has befriended her and allied with her. It may lead to romance as well. Mostly, though, Ji-dam as a character is interesting because of what she brings out of Seon. Her sincerity and her desire for the truth strengthen his resolve and give him hope. She is his reflection. I'm also in awe of how wonderful Lee Je-hoon works with Kim Yoo-jung who is fifteen years his junior. Between them age doesn't matter and it makes their on-screen chemistry strong.

As for Seon himself, he is learning to play the political game, but not quickly enough. His trust in his mentor, Minister Park, is blind. Park is not a bad man. However, he will go against his conscience to do what he deems needs to be done for the greater good. That way of functioning is in direct opposition with what Seon (and Ji-dam) believes. Seon does not yet have it in him to doubt those he loves and trusts like his father does. But he will learn by the time "Secret Door" comes to an end and it will be the most painful of lessons.