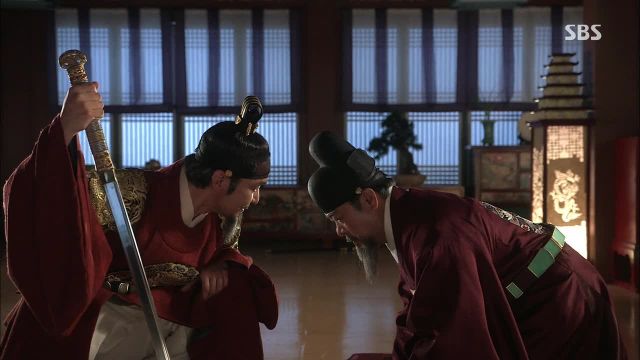 When the players in "Secret Door" are pushed to their limit, they turn into those they fear. It's a terrifying reality of the pressures of politics. Father turns against son. Mentor against student. Friend against friend. This is when Seon discovers the truths about those he trusts most and has to face reality: trust is something no one in his life is worthy of.

Seon has relentlessly pursued the mystery of his friend Heung-bok's death despite the warnings of many . It is a pursuit shrouded in mystery that involves more than Seon realizes. He believed he was merely seeking justice; instead he's discovered a quagmire of shady political dealings that trade in human lives. While Seon has always known the world he lives in is a dangerous place, it is only now that he is truly penetrated by it. Why? He learns those he once trusted have been feeding him half-truths. Their sentiments are pure, but they omit important, harmful information. This omittance hits Seon as full-blown betrayal and Lee Je-hoon is milking every second of it.

Seon is an amazingly nuanced role that Lee works to the fullest, especially now that the heavy reality of Seon's position in the palace has set in. With each passing betrayal and each murder, Lee has turned Seon's bright-eyed enthusiasm for truth into a glassy-eyed hunger to discover the root of his pain, the cause of his friend's death and the subsequent conspiracies. Not only does Lee have the challenge of taking on a newly disillusioned character, but so does Kim Yoo-jung as young Ji-dam. Ji-dam hasn't been as prominent in this week's episodes, but she is still significant as her journey mirrors Seon's. Their youth is blighted by the paranoia and greed of those older and wiser than they. Although becoming jaded makes them wider and more capable of battling those in power, its sad to see that youthful exuberance.

Another character who is growing, and not necessarily for the better, is Minister Park, Seon's teacher. He has discovered the document that the king has lusted after for thirty years. It's contents convince Park that those involved in the document and the deeds it chronicles (the murder of the late king) should be punished. To make that happen, Park turns into a person  much like the paranoid king - ruthless, willing to manipulate. Basically, everything he had previously been against. Park himself realizes that his actions mimic those of the king, which  makes his character even sadder albeit more interesting.

Princess Hyegyeong, like Ji-dam, has a smaller role this episode, but it is very powerful. Her lover for the prince causes her consistent torment, especially since he cannot turn to her in his times of distress and need. In fact, in those times he secludes himself to suffer in silence. Hyegyeong hurts with him. She also reminds me of the king in this way. Politically motivated, but underneath the ambition lies genuine emotion. She lacks the paranoia of the king and the thirty years of living in constant fear of a document that could heave him dethroned and killed, but she is still similar. The parallels between characters is a wonderfully clever move on the part of the writer.

King Yeongjo's consistent paranoia has finally flared and overtaken his fatherly concern for Seon. His position as king of Joseon is more important than the life or happiness of his Seon. The paranoia and fear has made his insane worrying and rambling lead to a mental break of sorts. It's amazing television; it's not so amazing for Seon who receives the brunt of the king's paranoia-fueled ambitions. Son and father have no yet come head to head since Seon's discovery of the document, but that should be an epic showdown indeed.