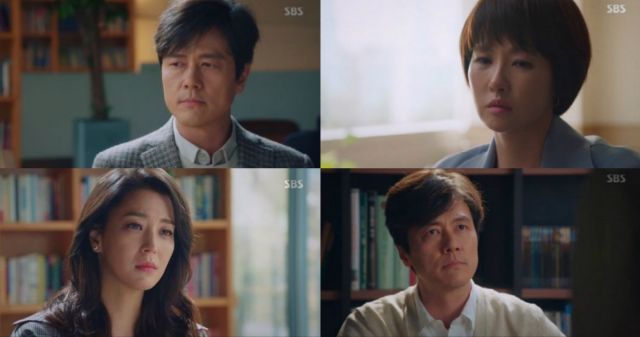 It's hard to imagine there was once a time when I was genuinely enthralled with the brisk pacing in this drama. Time was we were always getting new, meaningful revelations about Moo-han and Soon-jin's backstory. Now they just keep having moments over whether or not they should be breaking up or moving out or whatever. There's only so many times a couple can have that argument before their entire relationship starts to come off as incredibly fickle.

But then the relationship between Moo-han and Soon-jin does not actually matter anymore, since all the drama is now tied up in the trial. I still can't figure out why "Shall We Kiss First" thought it was a good idea to drag an evil candy company into the story. The entire idea is just too absurd to take seriously. I mean sure, candy companies do evil things, but their evil is a very banal one, involving impersonal exploitation. Here we've got a big shot executive mocking a guy with a dead daughter and threatening to destroy love.

I mean geez the whole thing with the recording is just plain stupid. I don't see how evidence like that would be admissable at trial. And even if it was, the recording benefits the plaintiff's argument. If Moo-han was aware of the candy company's unethical practices while they were still ongoing, that suggests any current testimony he can offer to that effect is consistent with his past beliefs. That Moo-han's current motivation has changed a bit does not alter his credibility as a whistleblower.

The subplots remain quite weak. Mi-ra is now incredibly insecure about her relationship with In-woo for reasons that aren't clear to me. At first I thought the whole incident with the bow and arrow was just some kind of weird game they were playing. But it turns out that everything ties back to Moo-han, as it always does, just in generally convoluted ways that appear to imply that no other character in "Shall We Kiss First" has a life of their own.

Seok-yeong being the most obvious example. When Moo-han attacks the whole idea of I-deun living with him, saying that I-deun already has a father...uh, isn't that totally correct? Why is Seok-yeong so interested in her ex-husband's welfare all of a sudden having been so disinterested for the last decade? Is it just because he's dying? Because really, it's no mystery why Moo-han prefers the company of Soon-jin when she wanted to do what was best for him before finding out about that.

"[HanCinema's Drama Review] "Shall We Kiss First" Episodes 31-32"
by HanCinema is licensed under a Creative Commons Attribution-Share Alike 3.0 Unported License.