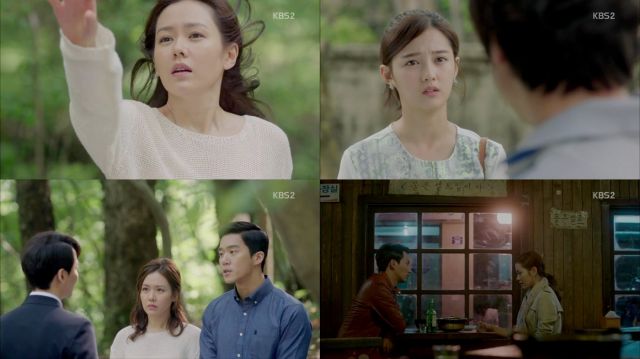 The episode starts out fairly strong as get another glimpse of the relationship dynamic between I-Soo and Hae-Woo. The camerawork and music combine to create an atmosphere that's both melodious and creepy. I actually felt a little bewildered, trying to figure out the meaning of the scenes in the woods. But I think this was probably the point. Their relationship is, at this point, still difficult to define.

There's another great treat when I-Soo unexpectedly joins Hae-Woo's family for a very upper crust outdoor lunch. It's here that most of the show's strengths really shine through- it's truly, painfully obvious that father Ee-Seon wants to be intimidating, but constantly just comes off as an insecure bully instead, who I-Soo easily and subtly knocks down. There's true terror in what I-Soo does to unhinge the Jo family here- and it works all the better because no one can publically acknowledge why it's so frightening.

Unfortunately, from this point the episode is all downhill. I think I've pinpointed the main weakness that's derailing this show- the investigation scenes. In the first place, they're boring. In the second place, they're unnecessary, as there's not even much to investigate yet. Finally, Hae-Woo's involvement in them really wrecks her relationship with I-Soo. She's smart enough that this kind of information should put her on edge with him, but their scenes follow through as if they're just long separated high school friends.

All this emphasis on investigation also takes screen time away from other characters who are more interesting to watch. Joon-Yeong is interesting as Hae-Woo's newlywed husband who seems to be quite good for her- but he hardly has any presence this episode at all. Likewise, we really need to know more about the Jo family patriarchs. They're the entire reason for the elaborate revenge plot in the first place, but it's really not very clear what they've been up to lately aside from attending the wedding.

While this episode is riddled with problems, I was glad to see that the use of flashback was much more restrained here. Had the fourth episode not been so awful with the unnecessary flashbacks, I probably would not have noticed it at all. In any case, "Shark" is quickly becoming an enigma. Is this show supposed to be about revenge, romance, or detective work? It's only doing one of these consistently well- still, the next episode should give a better idea how serious it is about dealing with its other main plank.