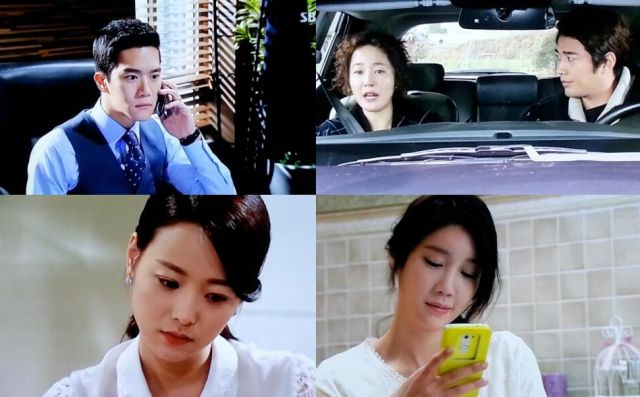 I keep forgetting that Eun-soo is married. It's pretty easy to do that, given that Joon-goo has been such a non-entity when it comes to the emotional situation of his wife. We've spent several episodes now that have basically just resolved around Eun-soo crying about the various plot stuff involving her daughter and ex-husband, but it's only this episode that Joon-goo offers her any meaningful comfort in these times of crisis. I'm not even totally sure he's ever had a scene in the same room as Seul-gi yet.

This is problematic, naturally, but only in past context. That we're finally seeing the two main couples in this drama actually interact as romantic couples is immensely relieving, if only because it brings some variety to the proceedings. Eun-soo's always bugging her big sister Hyeon-soo for help, but I'm never really sure what she's expecting her elder sibling to do. While harassing Tae-won has some emotional value it's not going to be much help with Eun-soo's broader problems.

After all, Hyeon-soo has her own issues. She has to expend a lot of energy this episode resisting romantic advances. Which somehow just isn't as exciting as it sounds. This drama has lots of problems with tone and constancy. There's so much weepy stuff I'm having trouble figuring out whether certain funny moments are supposed to be comic relief or just bad writing.

Part of the problem with this is the acting, although it might be more fair to hold the direction of the acting responsible. "She Gets Married Thrice" has built itself up on the basis of inner emotional turmoil. This requires an extremely strong performance or else proceedings just get kind of sappy. And right now we're in sappy territory. The characters need to make a better job of understanding and trying to grasp their destiny, because right now there's very little conflict. We're just waiting for other stuff to happen.

It's telling, for example, that we rush right through the wedding between Tae-won and Chae Rin. Somehow I expected that rich people would have relatively fancy complicated weddings. Then again maybe that's how they stay rich- by not wasting all that hard-earned cash on unnecessarily elaborate ceremonies. Now there's a socially relevant topic I'd like to see a drama address more directly. Unfortunately, like almost everything else that's interesting in "She Gets Married Thrice", this particular subplot only exists in my imagination as subtext.

"[HanCinema's Drama Review] "She Gets Married Thrice" Episode 12"
by HanCinema is licensed under a Creative Commons Attribution-Share Alike 3.0 Unported License.