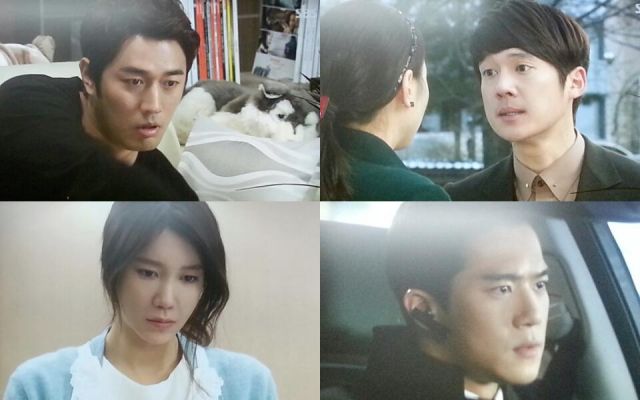 For awhile the only thing I could really get interested in was the furniture. I know that's a bit of a weird thing to praise but honestly the furniture in this drama is pretty great. These look like homes people could actually live in and there's all sorts of fun details that reflect the attitudes of the presumed decorators. For the mean wealthy family there's excessive opulence, for the nice wealthy family there's plain functionality, and for Hyeon-soo there are pictures of her dogs everywhere. These sets themselves tell quite a story if you pay attention.

As to the actual story...lately this drama has been lacking much emotional presence. I know who these characters are and how they relate to one another, but they always just feel kind if disconnected. There's relatively little romantic chemistry (at least from the married couples), yet a near excessive emphasis on domicility and homemaking is always present. Not exactly progressive stuff, if you're looking for an empowered women's narrative.

However, this time "She Gets Married Thrice" finally actually does something with this material. Barely an episode away from her ill-advised wedding, Chae Rin's married life has already hit a crisis point. Having made one dumb mistake, Chae Rin finds herself with a rather unnerving degree of chilled hostility from her husband and in-laws. It's worrisome on multiple levels- no one's giving her the benefit of the doubt, but they're also not accepting her apologies or attacking her directly. That's a pretty bad limbo to get stuck in.

I'm actually seeing fairly clearly for once why Eun-soo decided to marry into Joon-goo's family. Their temperment is the exact opposite of Tae-won's. Far from being manipulative or rude, they're polite, welcoming, and understanding. But the dark side to this is that they clearly expect this kind of cheerful attitude from everyone in the household, which puts a real damper on conflict resolution.

This episode does a lot of good for "She Gets Married Thrice" by just taking a step back from the explicit conflicts and emotional hand-wringing to just give the audience a chance to see what everyday married life is like for the two couples now. It's much easier to gauge the possible conflicts from this point. If this is the reaction these characters get from mistakes that are honestly not that severe, the deeper more alarming possibilities this drama has built up take on an unsettling sense of urgency. Now that's good sequential storytelling.

"[HanCinema's Drama Review] "She Gets Married Thrice" Episode 13"
by HanCinema is licensed under a Creative Commons Attribution-Share Alike 3.0 Unported License.