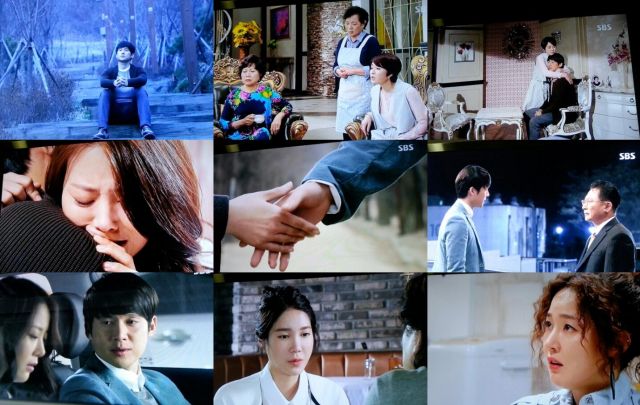 In one sense the drama's sudden shift to Chae Rin's dark subplot is a bit of a cheat. It's not like we've been clear up until this point that there was an actual reason for her bad behavior. By and large it's been much easier to chalk up her poor attitude to Chae Rin's own sense of entitled selfishness. The woman hasn't done much to endear herself to the viewer. A significant portion of this drama has just been Chae Rin abusing Seul-gi, however well-intentioned that may have been at points.

But just because that's how Chae Rin has seemed on camera doesn't make her a bad person. And it's frustrating as "She Gets Married Thrice" takes pains here to note that it's really our fault for assuming Chae Rin had to be a villain in the first place. Yes, the script goes over this by having the characters themselves discuss their own reactions to the storyline. A bit of a cheap trick but it does get the point across. We've all been so absorbed in the lives of the more central characters that Chae Rin just hasn't seemed important.

The cruelty of this is especially obvious when we finally meet Chae Rin's parents- she's the only young character in this drama whose parents we haven't met. Note that even very minor characters have had these filial scenes, and that they've proven essential to understanding those characters. Yet to date the camera hasn't seen fit to give Chae Rin that kind of exposure because, why bother? She's just the woman that abuses the child, after all.

It's all too appropriate that Seul-gi now stays with her mother. I'd worry about her safety in the same house as Chae Rin, but with better separation and a decreased sense of respect for Lady Choi's arbitrary commands, it's possible for the healing process to start. Unfortunately we don't actually get to see the healing process- a bit frustrating but rather unavoidable given that there are only two episodes left. As much as I like this story direction, it really needed more time to breathe. The timeskip is definitely a cheat in that regard.

Naturally, this has most likely torpedoed the ending that we (and the drama's characters) were expecting in regards to Tae-won and Eun-soo. They do still love each other. Regardless, that's all gone now. Tae-won and Eun-soo are now both committed to fixing their mistakes, and part of this means realizing that they're better able to heal the damage that's been recently caused as opposed to the rift of their now long-sundered relationship. Perhaps that's a bit of a disappointment- regardless, they must now make the most of it.

"[HanCinema's Drama Review] "She Gets Married Thrice" Episode 38"
by HanCinema is licensed under a Creative Commons Attribution-Share Alike 3.0 Unported License.