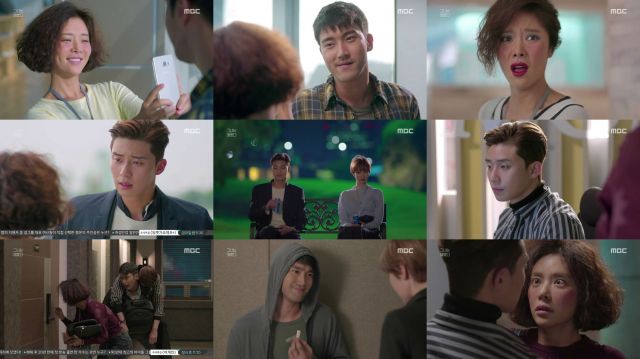 I really like all the chararcters in "She Was Pretty". They just have such very distinct charms. Take Hye-jin as an example. Yes, as Seong-joon points out, she is loud and proud in a way that is not necessarily justified by life circumstances, however much effort she puts into her work. But it's this very dogged quality that makes her such an impressive protagonist- one that's easy to identify with, because I think we've all had to make a major save that wasn't necessarily appreciated, since technically speaking everything is the fault of the lower-ranked person.

The elitist contrast of Seong-joon with Hye-jin and with Hye-jin-as-Ha-ri is fascinating as usual. One minute the man's such a jerk it's hard to stand him, and then the next he's acting ever so cute. All of this is a result of his tunnel vision. Seong-joon can only see Hye-jin or people who look like Hye-jin. Like a real person, Seong-joon is completely clueless as to how he comes off to other people. Mostly because he doesn't really care.

Contrast this with Ha-ri, who is so wrapped up with her family issues that she's apologetic while simultaneously being a pushover. And it's hard to blame her. Seong-joon is so enamored with Hye-jin as Ha-ri that he quite literally seems unperturbed by any obstacle. Hye-jin is for Seong-joon a powerful abstract concept which represents everything about himself that deserves admiration. The remainder of Seong-joon's personality appears to be just, well, a facade.

In between all this Jungian exploration i have to admit I'm rather relieved that Hyeok rounds out the cast as the guy who's pretty transparently cheerful. Really, just look at him singing in the rain. Hyeok is the guy who gets on your nerves but you just really, really want him by your side at the end of the day because Hyeol's just in it for the lulz. He's a perfectly empthatetic appreciative person when that'swhat the situation calls for.

If there's any flaw with "She Was Pretty" right now, it's that the characters are too likable. Ha-ri and Hyeok as second leads are so charming I can't help but want them to get a happy ending soon, because they deserve it. Their attitude isn't really malicious so much as it is an outgrowth of the frustration of their personal situations. Both of them make a really sincere effort to be appreciative and helpful, even when they don't want to. It's easy to see why they gravitate to Hye-jin.

"[HanCinema's Drama Review] "She Was Pretty" Episode 4"
by HanCinema is licensed under a Creative Commons Attribution-Share Alike 3.0 Unported License.