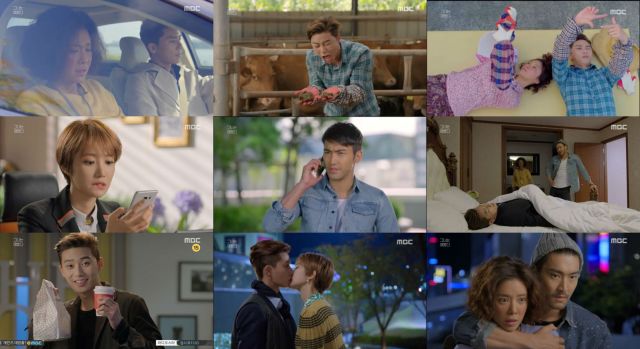 Hye-jin does not act like a main character. This episode makes it clear that this isn't just a matter of situational context- Hye-jin makes an active effort to put the needs of other people before her own. Hye-jin accepts abuse she should not accept out of a strong moral belief in doing the right thing and encouraging other people to be all that they can be. Hye-jin's attitude is heroic- but irrationally so. And as we see here, Hye-jin's lack of success is fairly clearly not due to lack of talent so much as it is an unwillingness on her part to expend personal effort selfishly.

It's another typically fascinating character comparison point, because Seong-joon has the exact opposite problem. The inconsistencies in the Hye-jin story keep piling up, and Seong-joon can't figure out how to cope. Seong-joon desperately clings to the raison d'être Hye-jin gave to his existence while being a jerk to the real Hye-jin- a woman who doesn't work well as a cog in the machien, but who is a wonderful, empathetic woman who deserves better.

The contrast is a heartbreaking one because it really pierce through to the center of the difficulty of modern work environments. The fashion magazine is, aside from Seong-joon's occasional outburst, a fairly fun place to work. The employees all have great rapport with each other. Even so, work can't always just be a fun party. Seong-joon is on the hook here, and Hye-jin has completely wrecked his ability to think straight.

For the romantic comedy genre this is an unusually counterintuitive idea. Normally the stiff guy is taught to loosen up by the heroine. Recall, though, that this all happened in the backstory. Hye-jin already got Seong-joon to loosen up back when they were kids, and mean jerk Seong-joon is the result. It's only when he's with Hye-jin (or a woman who he thinks is Hye-jin) that Seong-joon can ignore his selfish impulses long enough to actually be a decent person.

Hyeok and Ha-ri round out the cast, as usual, by providing similar contrasts. Hyeok lacks a character arc just the same as Hye-jin, and Ha-ri keeps trying to convince herself that a relationship based on lies has a future when Ha-ri herself can only act selfless in the most superficial way- much as Seong-joon does. I'm continually surprised at the sheer depth on display in "She Was Pretty". This is a romantic comedy with funny jokes and mostly standard story movements and yet there is so much going on under the surface.

"[HanCinema's Drama Review] "She Was Pretty" Episode 8"
by HanCinema is licensed under a Creative Commons Attribution-Share Alike 3.0 Unported License.