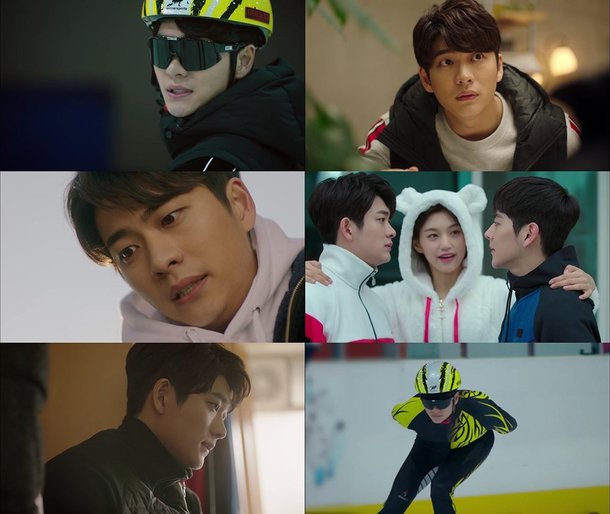 Hoon (played by Yoo Ha-bok) is Eun-ho's father. He's kind of a jerk, to the point that Eun-ho's flirtation with retirement comes off more as an excuse to lash out at Hoon than it does anything having to do with Ho-yeong. Eun-ho genuinely resents his father. But he mostly just dislikes Ho-yeong as being a mild annoyance. Seeing the difference spelled out like that really helps to emphasize their frenemy chemistry, since in the end, Eun-ho is motivated to succeed less by his dad's browbeating and more by his desire to stick it to Ho-yeong.

As immensely petty as this motivation is to become world class athletes...I actually rather like it. Again, we almost never think of Olympic athletes as immature children even though that's basically exactly what they are. The inherently ignoble nature of Ho-yeong and Eun-ho's motivation makes them quite relatable. Indeed, the odd similarities in their personalities are also a big reason why they fight so much, a force which their coaches deliberately use to make them train harder.

Not that we see that much training, relatively speaking. Ji-na continues to take up a lot of screen time. Ji-na does at least manage to be a lot less annoying than she was in the first episode, on account of having had her motivation better explained. Why Ji-na wanted to go to the nightclub at all when she came back to work on making it as a K-Pop artist remains unclear. Maybe she just likes nightclubs? That's one way to use your spending money I guess.

Mind, Ji-na is important less for her own plot and more for the way she motivates Ho-yeong and Eun-ho, who consciously or not, seek to impress her. And Ji-na, consciously or not, encourages them. This self-ignorance among all the cast members is very good characterization. None of them have any intentional designs at trying to attract a partner, they just sort of bumble into it accidentally by constantly acting with impulsive confidence.

Great scenes, or a brisk plot, are unfortunately not among the strengths "Short" has to offer. The only moment that came off as cute was how we see multiple characters, for completely different reasons, subjectively fantasize Ho-yeong's behavior as being more lascivious than it actually was. But then it's hard to feel very sorry for Ho-yeong when it comes to that anyway, since he acts plenty lascivious in objectively portrayed scenes too.