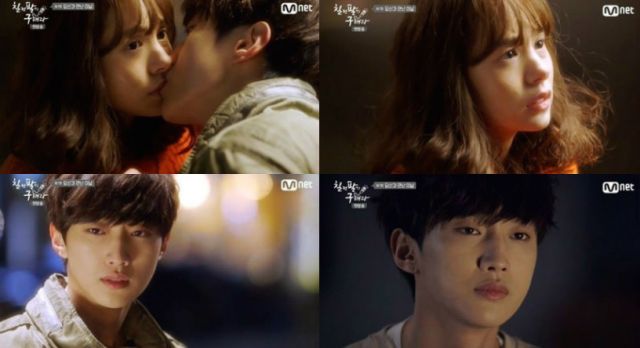 Usually it takes multiple episodes for a drama to have issues with pacing and build-up, yet somehow "Sing Again, Hera Gu" manages to screw this up right from the start. First we get the actual auditions, then a huge ridiculously long portion that goes over the drama's love triangle in minute, tiring detail, and finally we get back to the music competition just in time for a cliffhanger right when things are about to get interesting. I'm not terribly surprised to learn that this drama has three credited writers and two directors, only one of whom seems to have any serious prior experience.

To date the strongest portion of "Sing Again, Hera Gu" is the comedy. It's not exactly high brow stuff. Nearly every single joke is punctuated by cheesy sound effects. It's to the credit of the cast that they're actually able to sell these jokes with their simultaneously serious/silly expressions. For all the problems with scripting and direction the characters are at least mostly charming, even when they're acting like jerks.

When the love triangle's not involved anyway. It's here that the scripting is particularly perplexing. Of the six main characters, three are in a love triangle and the other three have no idea the love triangle exists. Wouldn't it be a lot more organic for us to find out about all the relationship drama from the perspective of the other three, rather than an extended and mostly irrelevant look at the home life of the main three?

This is especially true given that the most interesting characters are, in fact, the ones not in the love triangle. Young Mr. Jang (played by Park Kwang-sun) has crippling and socially awkward obsessive compulsive disorder. Woo-ri (played by Yoo Seong-eun) is supposed to be fat. Apparently Yoo Seong-eun had to gain ten kilograms for the role but she doesn't look fat to me. That's not really the point, though. These characaters have jokes. I like the jokes. I don't particularly care for the obsessive tragic flashbacks.

The cliffhanger, in addition to being very poorly timed for a long first episode where almost nothing actually happened, does have one interesting story hook- a discovery made by Henry Chen Tao (played by Henry). Frankly this is a fairly goofy potential plot twist. Right now, though, the goofy charm is the main selling point of "Sing Again, Hera Gu", so I hope this angle is pursued further.