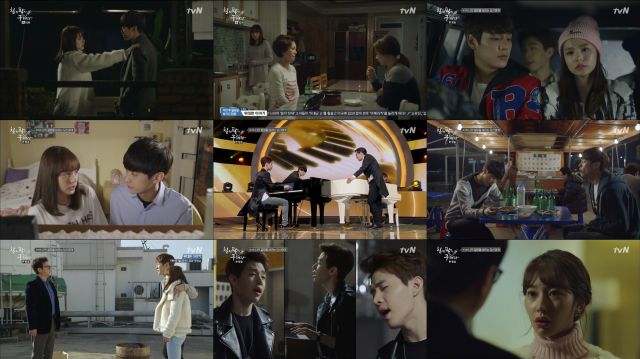 The villains in "Sing Again, Hera Gu" are very petty. I honestly can't think of any other way to describe their behavior. Je-gook, a man who's supposed to be a power player in the world of music, seriously dedicates resources and witnesses here to commit a crime that practically amounts to a high school prank. They've got him dead-to-rights for burglary and vandalism- if the accomplices have any sense they'll sell out the famous dude to avoid jail time. At least, that's what our characters could do, if they would just call the police.

It's times like these that I miss Scarlett. Sure, she was just as petty, but Scarlett has the defense of still being an immature young woman whose success is due almost entirely to family connections. To be clear, Scarlett does appear in this episode- mostly to appear in the cliffhanger and voice the first part of a question that we don't get to hear in full until next time. See, this is what I meant about "Sing Again, Hera Gu" not being in any position to mock other dramas. They literally made fun of this trope last episode.

All right, looks like I'll have to ignore the story again or I'll just rant like this all day. How's the music? Pretty good actually. There's a theme going on here of dueling soundtracks- literally, the band members play songs that superficially appear to make them seem to be fighting each other, when in reality they're playing clearly choreographed pieces that just make good use of visual and musical symmetry.

Except for Henry Chen Tao's birthday song. Although that was creative enough I'm willing to give it a pass for not fitting into the rest of the episode's general design. The overall core conflict of "Sing Again, Hera Gu" right could best be described as characters being driven apart by external factors...I guess. Honestly, the individual plotlines are so all over the place here I can't really think of any good way to tie them together.

There's not even a whole lot in the way of jokes here to remove the larger sense of dramatic tedium, so this episode is relying pretty much entirely on the soundtrack. So I guess it's a good thing "Sing Again, Hera Gu" has that much to fall back on. One thing did bug me- why are they saying the main character's English name is Haera, when all the writers in the English sphere have been calling her Hera? Why, it's almost like they design these things without taking our opinions into account!