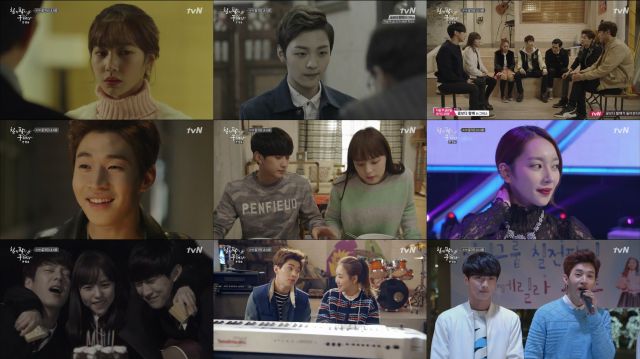 Just when I thought "Sing Again, Hera Gu" couldn't get any more dumb and petty, the central conflict ends up being about security issues of all things. How did Se-jong even get into that office in the first place? Does the secretary just wave in everybody who she recognizes even if they're no longer clients? Why does Je-gook have a button on his desk that sets off the fire alarm- in what possible context could that be useful? Do bands regularly have guitar burnings in his office?

And that's just the small stuff. That stupid necklace- first, nobody would use an actual, valuable diamond necklace for a performance where a fake would be indistinguishable. Second, even if there was an actual, valuable diamond necklace, it would have an actual guard, not just a box with an easily viewable passcode. Third, backstage security and CCTV would make it trivially easy to identify who could have taken the necklace, and the dumbest police officer in all Korea would immediately finger the guy who went into the room, alone, for no apparent reason. Finally, why did Hera even bother to take it off in the first place!

The sheer martyrdom "Sing Again, Hera Gu" is going through right now is absolutely irritating, and reminds me of the worst bits of the opening episodes. The villains have firmly crossed the line from music industry jerks to cartoonish moustache-twirling serial caricatures. I half expect their next plan is going to be to tie Hera to some railroad tracks, because if they're able to get away with this much I don't see how that could possibly fail.

Good parts? Well, there's the music- although that's somewhat difficult to enjoy when all this clutter of terrible plot is rattling around inside my head. Henry and Woo-ri are, for what it's worth, absolutely adorable. They're dorky, innocent and unassuming, mostly, which is what really makes all their scenes here so much fun. I'm not sure why or how they went to the English village, but it doesn't really matter.

What does matter is the rather dark and extreme turn the ending takes, apparently just to twist the knife of tragedy just a little more as justice will inevitably succeed in the final episode. Well, that's all well and good, but I frankly would have rather "Sing Again, Hera Gu" just stuck to the songs rather than try to make a serious story out of any of this. The writing takes frequent turns toward obnoxious storytelling, and I'll be glad when that much is over with and this drama will only live on as a soundtrack.