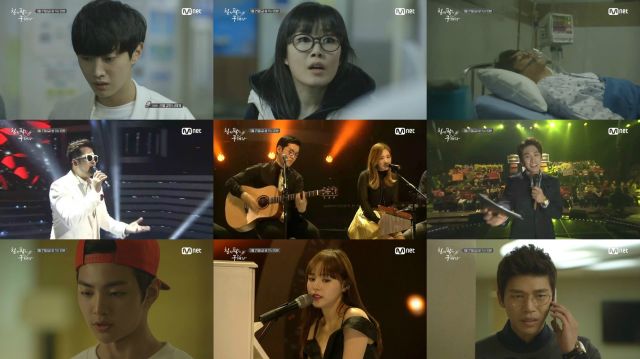 Almost the entirity of this episode is dedicated to the musical show where the titular team makes their debut. There's plenty of musical numbers and very little plot- which is fine by me, since I'm rather tired of discussing my irritations with the plot. Weirdly enough, aside from the cliffhanger most of the important story points were actually resolved last episode. The secondary love line, the coming out story, and the ever-annoying Scarlett are now well in the past. That leaves the primary love line and the archvillain Je-gook. And these plot points aren't really resolved by deliberate character action so much as just by random accident.

But then, that is the point of the drama isn't it? "Sing Again, Hera Gu" has never thematically been about the plot. It's been about the main characters trying to overcome obstacles on the way to their dream of musical stardom. The outrageous nature of the obstacles notwithstanding, the fact that the team has made it through all these hardships and finally come out on the main stage is itself a kind of victory regardless of what happens in the actual story.

Viewed from this perspective the way Je-gook inevitably gets hoist by his own petard is actually rather satisfying. For the first time after several episodes of suffering from blatant crimes our lead characters finally see the inside of a police station, and they stay just long enough to make a few irritating comments before leaving to get back to focusing on their music. Their tenacity is admirable, even if it's often been stupid.

Nonetheless, as long as music is involved, that means it's all been worth the effort. I counted nine musical numbers here- that's more than any other episode to date, even if we bear in mind that almost half of them are from random guest appearances. And that's one of the positive points of "Sing Again, Hera Gu" I must begrudgingly note in its favor. The drama has been absolutely loaded with references to the K-Pop industry, and even if I've never understood most of them, I imagine a fan probably would.

My overall generally negative appraisal of "Sing Again, Hera Gu" as a drama hasn't changed. Take the epilogue for sheer incomprehensibility- I'm not even sure why the writers felt the need to call that an epilogue, it's just a random dance party. Even so, while the overall narrative design of "Sing Again, Hera Gu" has been terribly scattershot, it's always been consistently excellent in regards to music as well as the charismatic performances on the part of its excellent cast. That's worth something at least.