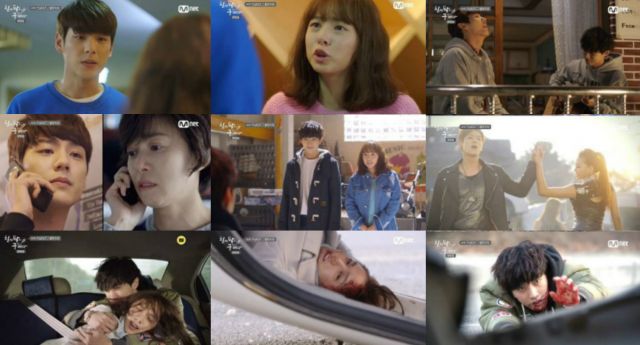 If I didn't know better I'd think this drama was deliberately trying to antagonize me. This episode has the exact same flaws and virtues that I discussed last time- except there's more flaw and less virtue. We have one really good, really fun song to start the episode out out. Then there's a big conversation about betrayal and the three characters not in the love triangle are almost completely sidelined as the whole episode turns into serious emotional drama about characters who have little defined motivation outside of childhood flashbacks.

Se-jong (played by Kwak Si-yang) is the one who screws everything up, for reasons I frankly had trouble grasping. On a technical level, I mean. Contractual identities can be switched? Why were contracts even being signed while everyone was in the middle of a singing competition? And why would that have any effect on everyone else in the contest pod? Is this all some sort of music industry mumbo-jumbo that would make more sense if I had more familiarity with the way the business works?

In any case, Se-jong's action mostly leaves Hera (played by Min Hyo-rin) and Se-chan (played by Jin Young) to their own devices. Their adventures eventually lead to a plot development which will no doubt eventually utilize the mysterious duplicate Henry Chen Tao was talking about last episode. How any of this is supposed to tie the story together in such a way to bring the ensemble back together I have no idea.

On one level I'm kind of morbidly fascinated at the extremes measures "Sing Again, Hera Gu" is willing to take in order to sabotage its own premise. Note that the beginning of this episode takes place all the way back in 2010- I think we're still in 2010 by the end although I wouldn't swear to it. Is that what the drama is going for? An extended historical epic about the birth of music stars?

If that's where we're going can we please hurry up there already, instead of focusing on tragic melodramatic hospital visits? Like Tae-poong (played by Shim Hyung-tak). Now here's a character I can get behind, mostly because his flashbacks involve actual music rather than...whatever it is that's been defining the story of this drama so far. To be honest Tae-poong is somewhat confusing to me, because I'm not sure whether he's supposed to be serious or a self-parody. Even so, I'll gladly take his ambiguity over all these other plot points I most assuredly do not like.