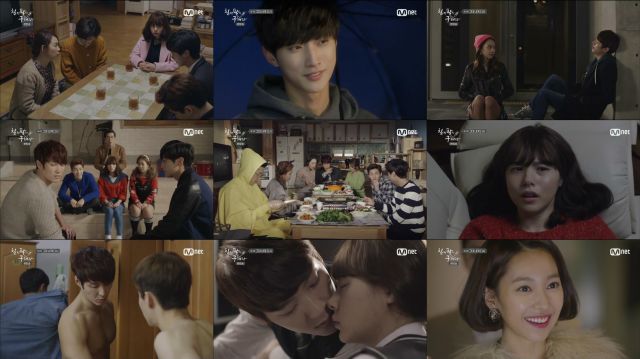 So, the dark secrets regarding Se-chan and his separated twin brother are...not really explained that well actually. Well, sometimes people get babies confused. It happens. I mean let's be honest most babies look identical anyway. Actually I find myself wondering about their father...no, never mind. I don't want to know. If he's not in the picture that means he'll probably re-enter the story in a comically melodramatic way and "Sing Again, Hera Gu" is already constantly trying my patience with exaggerated tragedy.

I can only just barely tolerate Hera's relationship with the new Se-chan because it's so simple. She's haunted by the fact that he died, and yet is back again. Wait, is the new guy's name also actually Se-chan? Never mind, I don't care. The plotting in this drama is so contrived that this would barely even register as improbable. If I keep trying to logically process this drama I'm just going to give myself an aneurysm.

So let's discuss the songs. The songs are pretty good. Even the sad ditties that bookend the episode are pretty fun. I increasingly get the impression that "Sing Again, Hera Gu" is less a drama as it is a complicated ploy to sell the soundtrack, and I'm OK with that. Even the ambient music is a lot of fun. The main theme is just crazy ensemble fight song, and every time I hear that come on it's just, oh yeah, we're getting real here.

It's a strange story indeed where the montages are more fun than the actual story. So we have to change the set in order to turn the apartment into a plausible music studio? Forget doing that off-screen- let's have a song! If "Sing Again, Hera Gu" wants to turn every random errand into an excuse to have the cast perform, that's fine by me. Even if the acting and writing is all over the place, the music is consistently excellent.

The jokes too, when they get around to them. Very good use is made of Shim Hyung-tak - this guy really is one of the more underrated ensemble performers in Korean dramas, I think. And he also looks unexpectedly hot with his shirt off. Let's add that to the list of things I'm all right with "Sing Again, Hera Gu" doing- trying to convert me to homosexuality. That entire scene is some of the most blatantly absurd fanservice I've ever seen. Well, good. Fanservice is silly and "Sing Again, Hera Gu" gives it all the respect it deserves- in the service of jokes.