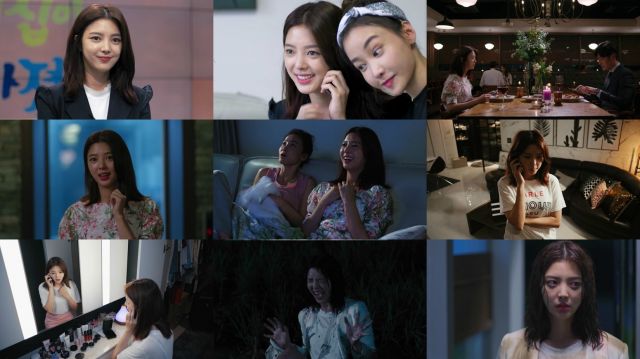 Ra-hee (played by Uhm Hyun-kyung) has it all. She has a successful job in the furniture design industry, makes appearances on talk shows to promote herself as a hard-working woman, and a rich boyfriend  by the name of Jae-min (played by Kwak Hee-sung) who obviously likes her. Phrased that way, Ra-hee's life doesn't really sound all that impressive. But weirdly enough, that's the tone the production team has chosen for the first episode, as we wait for Ra-hee's vague happiness to be threatened by past failures.

"Single Wife" is to date fantastically boring, and its main redeeming quality is that it is boring in such a specific way I can't help but feel like this is intentional. The romantic comedy formula typically shows the female lead at the top of her game before being brought down in humiliating fashion. But Ra-hee's best day feels so humdrum and so pointless it's genuinely difficult to figure out why she even wants this lifestyle.

Here's an example. Usually when the script shoehorns in gratutitous English, it's to make the characters in question look cool. But in "Single Wife", all we get is a bunch of dry technical business talk. If moving fashionable product is supposed to be Ra-hee's passion in life, there's little evidence in the pure saleswomanlike manner in which she negotiates the transaction. Is the stilted English due to a bad language coach, or is it an intentional reflection of Ra-hee's shallow life path?

Further complicating this question is Ra-hee's husband Min-hong (played by Sung Hyuk), who also speaks in stilted English but has the somewhat more noble furniture design industry goal of making...personally crafted furniture for everyone. Also he lives in Italy, yet we do not see him speaking Italian. Is this because this would make Min-hong seem romantic and attractive, or because the production team didn't want to hire an Italian language coach on top of the English language coach they already had?

These questions intrigue me, even if they are admittedly probably completely irrelevant. My guess is that "Single Wife" is just going to be a standard cable romance, with a decently interesting high concept, but ultimately just trying to play it safe. I do find myself wondering what to make of Jeong Yoon-soo being the credited director though. This guy is well known mainly for doing weird movies about adultery. Not weird in that they're perverted, mind you, but in that they're unusually subdued about a fairly racy concept.