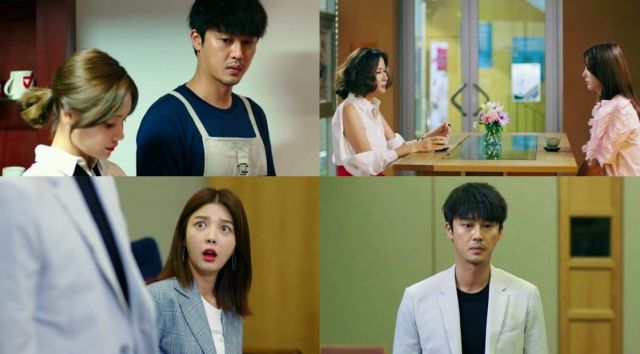 So Ra-hee and Min-hong are finally at court, and it looks like they can get the divorce finalized. It doesn't happen, obviously, and this scene is supposed to represent how Min-hong still has feelings for Ra-hee and won't give up on her so easily. This is likely to eventually contrast with how Jae-min will eventually give up on Ra-hee entirely because of her inability to come clean with him on the full situation.

Once again, though, I was just reminded about what a dork Ra-hee was for ever thinking she had been divorced in the first place. It's weird how even though Ra-hee is the main character, has the most scenes, and defines the entire motivation for both the male leads...I still can't really grasp much of her personality. "Single Wife" can't even explain why Jae-min is willing to go to bat for her save for that flashback to when they first met. What has she done for him lately?

This apparently validates In-hwa's suspicion of Ra-hee, which is odd since everything else about In-hwa's actions just screams stereotypical mean rich matriarch. We even get backstory emphasizing this point, as Hyo-rim is emotionally torn by an important revelation of In-hwa's past and how it relates to her family. It's all suitably ironic, since of course In-hwa would be paranoid about an upstart woman trying to join a rich family when In-hwa herself did exactly the same thing.

I'm not really sure how this is going to relate to the main plot of Ra-hee and Min-hong inevitably getting back together though. About the only thing I can think of that would result in In-hwa clearly losing would be if Jae-min married Ra-hee against her advice. Because what else is he going to do, disown her? Fire her from the company? Although it's not clear which family member actually owns the company. Technically it might be Hyo-rim.

While the main plot has been best suited as situation comedy, everything relating to In-hwa would feel much more in place in a standard soap opera. That's just more of the many odd tonal choices that "Single Wife" makes, like it's never really sure which genre it wants to commit to. Still, frequently muddled though the execution is, I'll give the drama this much. It's internally consistent. The entire accident at the big ceremony was contrived and dumb but it is not, on the face of it, entirely implausible.