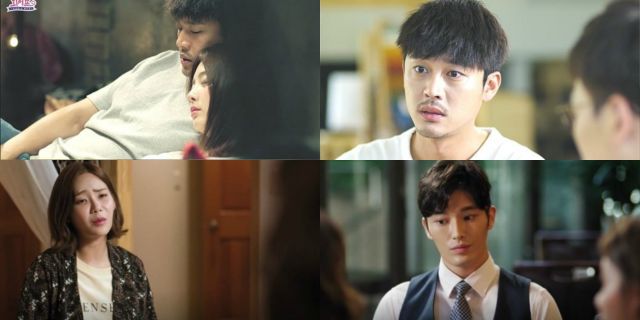 It's odd Min-hong is continuously the most sympathetic character when he's so nosy, and annoying, and also literally the only reason "Single Wife" has any conflict at all. Mainly it's just that Min-hong is so darn cute and well-meaning. He's not even remotely jealous or suspicious. Shoot, Min-hong isn't even upset that Ra-hee freaks out about the prospect of him touching her. As far as Min-hong is concerned, everything should be done in such a way to maximize Ra-hee's comfort and happiness.

It's unfortunate that Ra-hee comes off as so unsympathetic by comparison, when she's the technical victim here. Actually, her character comes off as kind of dumb, or at least ignorant. Considering that Ra-hee was married to Min-hong for quite some time, we'd expect that Ra-hee would have a pretty good understanding of Min-hong's personality, knows what he would or would not do, and would plan accordingly. Instead, Ra-hee seems to know less about Min-hong than we do, which is odd.

Another problem with "Single Wife" is just the weird ragtime music. At the times, it sounds cute. But overuse of these eccentric instruments gets to be annoying. I'm not even sure what the names of these instruments are- that's how old-fashioned than they are. I think one of them is the sad trombone, just with a wider variety of implied emotional expression. This does not work all that well with the tone, which isn't really a situational comedy. The jokes mainly come from casual conversations, not the obvious absurdity of the situations.

Consider Jae-min's mother In-hwa (played by Yoon Ye-hee) who very briefly meets Ra-hee and then...we're in a rush to end the scene apparently. That's not how situation comedies are supposed to work. When two characters with wildly differing personalities and motivations are in the same general area, contrivances must appear to force them to talk to each other. That's where the jokes come from.

That's the main flaw with "Single Wife" right now - it's just not funny, when the concept is inherently absurd. Weirdly enough director Jeong Yoon-soo does seem to understand how to do dramatic scenes correctly. Or maybe that's just because Sung Hyuk is very good at making sad faces in a wide variety of contexts. Whatever the reason, "Single Wife" really needs to find a tone and just embrace it. The drama doesn't even need to be good- it's got all the right elements for camp, just so long as it's interesting.