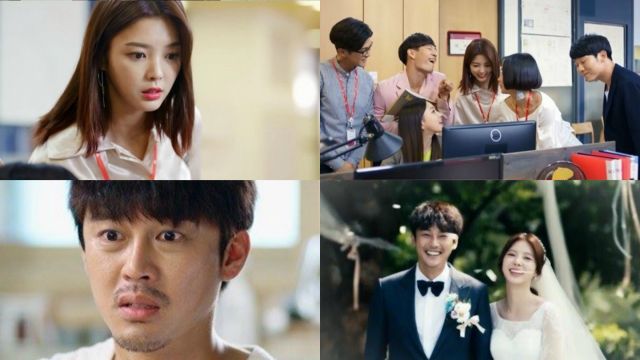 Ra-hee makes a serious effort to embrace the inherently campy nature of "Single Wife" by coming up with a more elaborate scheme to get rid of Min-hong than anything yet tried. What Ra-hee does is, she makes a list of all the personal habits Min-hong despises the most, and does them intentionally to try and provoke him into initiating a final break-up. It's a pretty good extended montage, hitting all the beats from obvious nasty habits everyone hates to ones peculiar to Min-hong.

Yet for all this effort, Min-hong never buckles, or even raises his voice. I'm really appreciating how Min-hong is a man of apparently infinite patience. His character really stands out among the cast of "Single Wife" as being such an aggressive straight man. All the other actors are so bad at being kooky that Min-hong's moments of standing firm and refusing to show any emotion more profound than mild confusion comes off as a unique character trait in and of itself.

Which is not good, since that calls attention to how thinly drawn all the other characters are. I'm now convinced, given the wedding scene, that Ra-hee really just doesn't actually know what she wants in life. That she thinks marriage is about wearing a big pretty white dress and having a big ceremony rather than living with another person and putting up with their obnoxious habits...well, that just shows how Ra-hee is going about this in entirely the wrong way.

Jae-min is such a boring leading man I'm hard-pressed to see why Ra-hee or anyone else would care about him, save for the guy's money. Certainly he doesn't seem all that interested in what Ra-hee is doing. Min-hong asks around about Ra-hee, visits her in person, and even goes to the lengths of taking care of Ra-hee's family members. But what's Jae-min doing? Just messing around with his own dull business life subplot.

I mean really, that subplot doesn't even have any jokes as far as I can tell, so what's the point even? Hyo-rim was briefly interesting as the somewhat annoying elitist person brought in among the normal workers, but we haven't seen much of that culture clash since her initial appearance. "Single Wife" can be good when it buys into the conflict, when different characters want different things and have to come up with ways to negotiate their way out of that struggle. So why don't we get more of that?