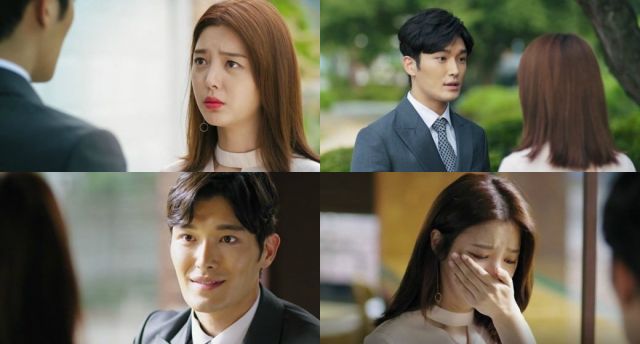 So Min-hong has gone missing and everyone has freaked out, going to look for him. It should come as little surprise that Min-hong himself is completely oblivious to everything that has happened. The guy just went to the mountains because he wanted some time to himself. That Min-hong should find this to be an unremarkable desire is of little surprise. Min-hong accepted Ra-hee's demand that he not go to Seoul pretty easily, so why would anyone freak out about him?

I really like Min-hong as a character. His sheer obliviousness to everything that happens around him is just plain adorable. Beyond that, though, the simplicity of Min-hong is such that whenever he's on screen it's usually pretty easy to forget the more convoluted and annoying aspects of "Single Wife", namely the entire premise. I could watch an entire cheesy drama of Min-hong and Ra-hee running away from cheesy nineties-era computer generated bees.

But inevitably, the action must take us back to Seoul, where Jae-min vacillates with his mom over the whole does he even have a girlfriend issue. Jae-min is a nice guy and all, and I can see why Ra-hee is touched by the revelation he makes at the end, but the man really does have no passion. Both Ra-hee and Jae-min continue to think of this marriage in business terms. It's a far cry from when Ra-hee is with Min-hong, and they're worried primarily about each other's emotional well-being.

Min-hong's presence also improves Hyo-rim's character, surprisingly enough, because his meet-up with her this time allows for exposition on some of Hyo-rim's more sympathetic character traits. Although, on a technical level, that scene was also incredibly awkward because we have the two old people who don't know each other, who may not even be capable of speech, just sitting next to each other expressionless. I mean yeesh, at least have them face the sunset or something so we can pretend they're smiling.

While the production design in "Single Wife" is best suited to a no-frills situation comedy, the actual plot is always pulling the story into some fairly routine boring drama. Ah well. I'll admit it's been awhile since I saw the whole "how can you marry her she's divorced" routine played out. Although, I'm starting to wonder how Ra-hee could be so scatterbrained to think that Min-hong would finish the divorce on his own. That's the main interesting character flaw we've seen from her.