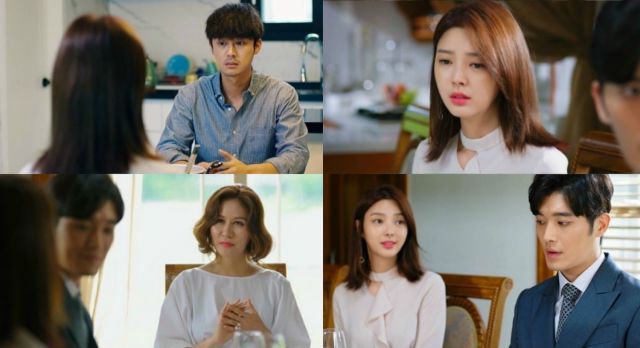 So dinner ends up going about as well as expected. We could already have guessed, after all, that In-hwa already hated Ra-hee without actually knowing anything about her. The whole previous marriage issue is just an excuse. It's kind of hard to blame her, considering that Jae-min was acting like he had something to be ashamed of simply by being with her in the first place and being very unnecessarily taciturn about it with his family.

Again, that's the main part of Jae-min that I can get. He's nice, and a surprisingly good sport about everything. But in spite of this, Ra-hee seems to mistrust him at every turn. I mean yeah, the whole "clean the apartment for the significant other" montage is something that any not perfectly neat person can identify with, but at some point you just gotta admit that yeah, you're a little messy, and that's never going to change.

That Min-hong already accepts every zany flaw about Ra-hee continues to be his main redeeming quality. It's also telegraphing the ending too obviously. Yeah, I know, the second lead never wins, but here, there isn't even any kind of a competition. Every little flashback just continues to emphasize how devoted and wonderful Min-hong is, and the fact that amnesia keeps resetting Min-hong back into this inherently pleasant state of mind is about the most obvious clue we can get that he is just naturally like this.

And how does Ra-hee respond to this? By being mean, mostly. Even granting that it is completely legitimate for her to be upset about their divorce not being finalized, I keep coming back to the fact that Ra-hee was the one who failed to get that confirmed at the time. The onus really is on the person initiating the divorce to make sure all the paperwork goes through. You can't seriously expect that a spouse who does not want to break up with you will put it in the necessary effort for that unless they're badgered about it.

I mean yeah, Min-hong can probably be counted on to do that, because he's so loyal and good-natured and pleasant in general. But there we just run into the paradox of how Ra-hee seems to trust her ex-husband more than the guy she's trying to get married to. That's just plain weird, and a pretty good clue as to how she's making questionable life choices in a whole lot of areas.