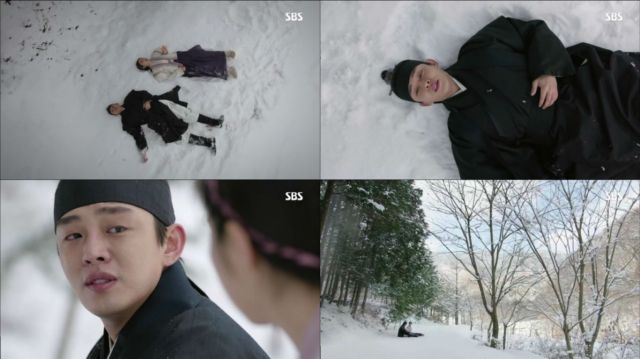 Bang-won has a bit of a hero complex. Normally when stories portray this as a bad thing, it's in the immediate sense. Like, our would-be hero is so completely dedicated to rescuing people that he completely disregards his own safety in the process, that kind of thing. In Bang-won's case, the problem is shaping up to be long term- our protagonist is so dedicated to saving Korea he can't stand the idea that someone else will do it instead.

In more charitable terms, of course, we can attribute this to Bang-won not being sure that Do-jeon's plan will work. But that's one of the awkward parts of seeing this story take place from several hundred years in the future. We know that, even from the most charitable point of view, King Taejong reign was filled with brutality not too much different from what we're seeing in "Six Flying Dragons" right now, and it wasn't until King Sejong that genuine reform of Goryeo era corruption finally managed to happen.

"Jang Yeong-sil - Drama" normally suffers from comparison to "Six Flying Dragons" although in this case the comparative irony is pretty difficult to ignore. In the former drama King Taejong keeps talking about all the heroic work he went to in order to wipe out Goryeo. He's apparently either oblivious or just plain uncaring of the fact that every time he turns around and the threat of physical force disappears his subordinates just continue doing what they were doing before.

It's sad watching Bang-won in "Six Flying Dragons" start to dip into that same thought process. You've got scenes like the whole frolic in the snow where Bang-won is showing vulnerability, fear, joy, and nearly every other kind of human emotion imaginable. Contrast that with the way Bang-won has to convince himself he's doing the right thing by engaging in tactics that undermine his friends. What's worse, Bang-won has to make deals with people he doesn't necessarily trust.

Most of the rest of the cast doesn't have much to do except react to Bang-won. While that somewhat limits the extent to which "Six Flying Dragons" can be a true ensemble piece, given how difficult it's been to follow the story lately, I'm grateful that at least one specific theme has been clearly identified. It's not a question of what's going to happen, but how. Who's going to pick what side in the upcoming power struggle, and why?