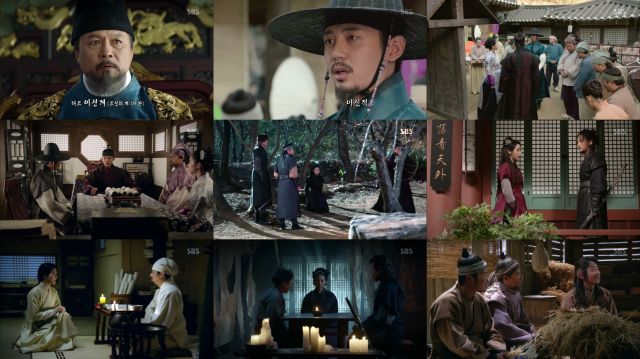 We already know that Bang-won is willing to do anything to hold on to power, but this episode the other younger dragons struggle to reconcile the increasingly cold and heartless Bang-won of the present day with the young man whose first priority was always justice. Muhyul gets the first crack at that problem, and he barely has time to reminisce about how they just made a deal with former enemies when an ethical conflict comes up. One where Bang-won doesn't even feel the need to pretend like he cares about wanton bloodspill.

What makes the situation especially dark is how "Six Flying Dragons" leaves it ambiguous as to whether or not Bang-won's plan had actually been compromised. The result may well have been worse than what might have happened had Bang-won taken a more conciliatory approach. But Bang-won is long past nuanced thinking. He even manages to inadvertently threaten Boon-yi, failing to appreciate that it's his new tendency to reflexively threaten people that has Boon-yi worried.

Then Na-kyeong shows up and demonstrates as usual how a proposal can sound completely reasonable as an abstract strategic concept, yet come off preposterously in any actual context. Her whole character very effectively shows how Bang-won has been surrounding himself with people who have no serious regard for emotional attachments. They just want to win, and hang out with other winners, if only because they love the prospect of competition.

Guys like Muhyul legitimately do not belong in a world like this. Naturally the main comic relief involving Muhyul here relates to his being presented as a man rather at odds with his own clothes- yet the thematic point remains. When Muhyul thinks back to what he's done over the course of "Six Flying Dragons", yes, he has been a bit of a dumb obedient oaf. But Muhyul's big emotional moments are when he decides to forget tactics and speak from the heart.

"Six Flying Dragons" need a dumb guy like Muhyul around if only to show how everyone else has managed to go completely nuts, entertaining propositions likely to get them all senselessly murdered in their sleep. Contrast that to a couple of familiar faces who have withdrawn from the battle entirely, and are clearly happier for that decision. It's only slowly dawning on some of our leads that, appearances to the contrary, the fight for the face of New Joseon is nowhere near complete.