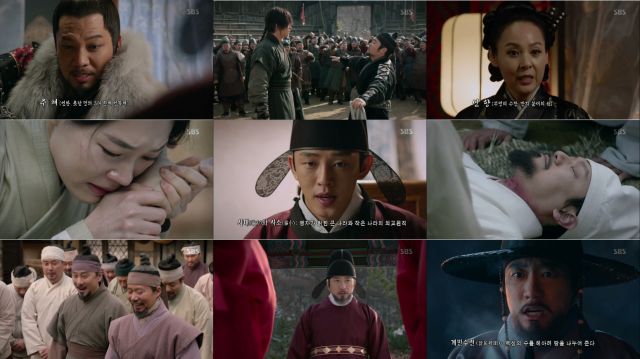 Joo-che (played by Moon Jong-won) is the provincial ruler of Yan. His birthright is powerful enough that he could conceivably seize control of Ming China, making him the third emperor of the world's largest nation state. In fact, we know from the subtitles that this is exactly what Joo-che does, eventually taking the title of Yongle Emperor, leaving a mixed legacy of effective government coupled with despotic brutality against all enemies be they real or imagined. Remind you of anyone we already know?

The friendship between Joo-che and Bang-won is perhaps one of the most outrageous historical inventions in "Six Flying Dragons", yet it comes off as surprisingly appropriate because, well, for one thing they're not really friends. Joo-che and Bang-won keep one-upping each other with psychotically dangerous behavior and the long term takeaway ends up being that as dangerous, ambitious men, they have a lot in common. It makes sense that they would get along, given how Korea was about the only neighbor the Yongle Emperor did not invade at some point.

But even more than Bang-won, Muhyul ends up making important inroads as he relates to his Chinese equivalents. Officer exchanges and dual military exercises are always a popular way of promoting friendship, because military officials aren't going to want to go to war with their Facebook friends. That the impetus for all this is an especially epic action scene where Muhyul plays the role of noble gladiator is just blood-pumping icing on the commentary.

Elsewhere, characters settle into established roles. We have a pretty good idea now of where Boon-yi is going to be in "Deep-rooted Tree", and it's quite appropriate that she ends up settling into a position of soft power. I like how Boon-yi does not let the power struggle between her former allies sour her on the prospect of doing good. Boon-yi is a community organizer- one that even the villains would rather leave alive, because she offers a level of personal trust inflexible government representatives can't.

Consider, for example, how Do-jeon closes the episode out making more big speeches, and yet the big evil act we saw was the killing of a person who surrendered voluntarily to the new order, and ceased to be any kind of threat to Joseon a long time ago. In populist victory, Do-jeon has no interest in showing mercy to former overlords. Even if Bang-won has nasty plans in store, he's earned the loyalty of men like Muhyul. And that's going to count for a lot beyond Muhyul alone.