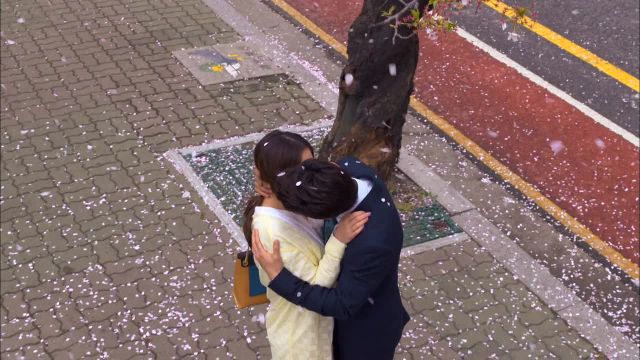 This was an episode of repercussions. People begin to see exactly where their choices have landed them, mostly as they suffer the consequences of their actions. While these situations provide a lot of humor, "Sly and Single Again" still has difficulty balancing the serious with the comical.

The serious situations seem haphazardly included although the way the characters deal with the situations on an emotional level is quite engaging . For example, this episode addressed how difficult it is for a divorced woman in Korean society to try and work and find romance. She is seen as a "used" woman and a bad influence in the job market. Jung-woo never realized that Ae-ra would suffer from this stigma. He, as a man, didn't go through the same troubles. It's a scary split in treatment between the sexes.

Along the same lines, Jung-woo frets over Ae-ra's romantic involvement with Seung-hyun and his imagination leads him to behave much like the typical female Korean drama heroine - throwing tantrums and calling up Secretary Gil to complain about missing Ae-ra. It's delightful to watch because of the role reversal and because Joo Sang-wook throws a particularly hysterical tantrum.

What wasn't so delightful was the fact that Yeo-jin is finally becoming a meddlesome second lead. She's ineffective because I simply don't care an iota for her character or for Kim Gyu-ri's acting. It's over-the-top, perhaps because she is overcompensating for her inane character. Yeo-jin's issues are real, but there is absolutely no emotional investment in how she came to her to tragedy. And, although her issues with her father are similar to those that Seung-hyun as with their father, it is hard to empathize with her when she complains of her father's tyranny.

Seung-hyun, on the other hand, is completely moving. His plight is easily empathized with. He became the jovial, free spirit he is because of his father's demands and because he wished to keep peace in the family. That's a huge burden that's easy to understand. It is what brings him closer to Ae-ra who understands what it's like to have a pivotal role in a family.

There were a few satisfying moments that I've been waiting for: Jung-woo scolds the gossipy women at work who have been harassing Ae-ra; Secretary Gil teases Jung-woo and then is in turn teased by Song-hee about his over inflated ego. Scenes like these make me wish for more of them. Secretary Gil and Jung-woo have such a fun rapport. It deserves more screen time.

The ending of this episode was a crowd pleaser as Jung-woo understands his feelings and acts on them. With four episodes to go, I expect a few more twists, most probably into angsty territory. Yeo-jin has yet to be a truly evil second lead, but I fear she is going to be. Hopefully the funny and the cute will make up for it.