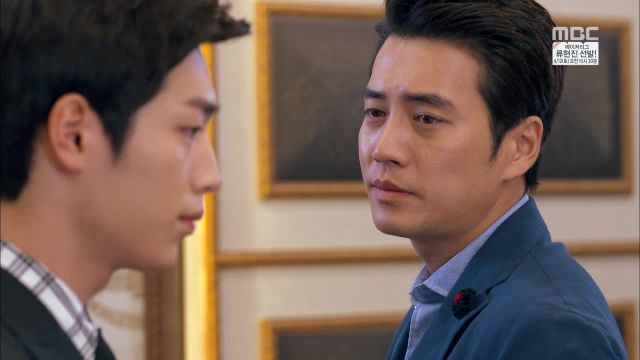 The number one form of communication in "Sly and Single Again" is eavesdropping. Most of the important plot points shared between characters this episode were accidentally overheard and observed. It has happened quite a bit before as well, but this episode had an abundance of eavesdroppers.

Jung-woo is the primary eavesdropper, which makes sense because he tends to stalk Ae-ra in a fashion that could become creepy. He overheard that she miscarried during their marriage and that jerks him into an entirely new understanding of Ae-ra, her anger, her pain and their divorce. While I appreciate the fact that Jung-woo grows because of what he's overheard, it would've been better had he heard it directly from Ae-ra. Part of their marriage issues were the secrets and unilateral decisions. If they can overcome that, perhaps they can be together again.

Both Yeo-jin and Seung-hyun are treading paths that I do not like. They follow in their father's footsteps, using manipulation and cruelty to win love and respect. For a minute, their father, the arrogant President Gook humbled himself before Jung-woo to beg him to marry Yeo-jin and make her happy, but when refused, he reverted back to his modus operandi: money as a tool for manipulation. Yeo-jin uses Jung-woo's need for money to get him to agree to marry her. Seung-hyun uses his status to dominate Jung-woo and win Ae-ra.

I do like Seung-hyun taking responsibility for his birthright and going to work with a vision for its future. I do not like how he's using that to best Jung-woo in the love game and to punish him for hurting his sister. The whole political play of the company is feeling contrived, especially when Seung-hyun has very little business experience and the board of directors accepted him without question. The company's issues are also very one-dimensional and are only present to give Jung-woo another hurdle to jump over before the end of the drama's run.

One thing Jung-woo does handle well is that he admits when he's wrong, begs forgiveness where he needs to, and stands up for his ideals. Yes, he was foolish before, but once he realized it, he made amends. He's a character who needs a little push in order to grow and change, but once that push is given, he changes a lot on his own.

There was a moment where stiff and unyielding Yeo-jin could've become a pitiable character instead of an annoying one. Yeo-jin didn't switch the bags to get Ae-ra in trouble. However, she did take the blame for it and used the situation to tell Ae-ra to leave Jung-woo alone. Yeo-jin's leg is another issue I can't pity her for. She cries and has fits, but she seems more like a temperamental child than an adult with a tortured past.

I sense noble idiocy in Ae-ra's future because a marriage to Yeo-jin is apparently the only way to save his company. Ae-ra can see how Jung-woo has suffered to build his company and doesn't want him to lose it. This is the point in the drama where such knowledge will cause her to make a self-sacrificing decision. Hopefully Jung-woo won't allow it or Seung-hyun will step out of his father's shadow and do the right thing - he'll help Jung-woo. h


Written by Raine from Raine's Dichotomy