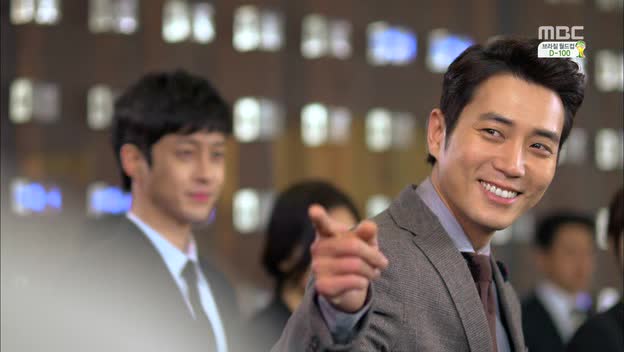 "Sly and Single Again" uses humor as its biggest tool and it does it well. It parodies Korean entertainment to hilarious effect and uses the character's imaginations to create some wonderful gags that would not be otherwise possible. What prevents the humor from excess are the serious issues fueling the comedy: divorce, misunderstanding and the effects of poverty and wealth.

That's the best thing about this show: the comedy doesn't belie the issues. Both Ae-ra and Jung-woo have been hurt and the show addresses those hurts through the comedy. Ae-ra feels like he used her and doesn't appreciate everything she did for them during their four years of impoverished marriage and the fact that she is left with the debt she incurred to give him startup capital. He feels singularly betrayed after investing all of his trust and love into her and how she very cruelly ended their marriage and his faith and trust in women. Neither has the ability to see the other's perspective yet and that is where the fun of the show steps in. Getting there is going to be hilarious, good fun. Hopefully.

The wounds from Ae-ra's and Jung-woo's marriage and divorce drives their individual revenges and humor enters. The dichotomy between their behavior with each other and their behavior with their sidekicks (Min-young and Secretary Gil) allows for storytelling, character development and just plain funny occurrences. It is where their imaginations go wild and we get funny parodies on Korean entertainment. One scene has Ae-ra imagining herself to be the lead actress of the popular 2008 drama, Temptation of Wife, where she mocks an element often controversial in Korean entertainment media: the mole that the wife uses as a disguise. This use of parody is one of "Sly and Single Again"'s strong suits.

The sidekicks are also much more developed than many such characters tend to be. While there is not much background for them, they have very distinct personalities and are the only people that can tell the leads that they're acting idiotic.

Then there is the newest addition to the story, Seung-hyun, who has a pretty typical characterization for this genre: rich kid with a massive ego who shirks responsibility. However, his friendship with Jung-woo and with his sister rounds out the character nicely. He has struck up an antagonistic relationship with Ae-ra, which makes the love square even more fun because both male leads have bad relationships with the main female lead. That is the recipe for trouble and more humor. It'll also be a way for her work ethic to rub off on him and let him grow into an adult.

The end of this episode threw Ae-ra into a sticky situation that will bring her to Jung-woo. It's a bit contrived as far as the plot goes, but since the writer handles humor so deftly I'm expecting good things. Don't disappoint me!