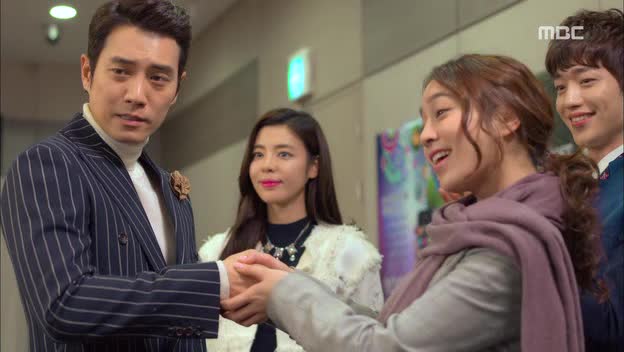 One of the cruelest punishments a person can inflict upon another is the perversion of a beautiful memory. The pain that Ae-ra and Jung-woo feel from their divorce spurs them into a pretty vicious cycle of revenge that includes using their loving past as weapons against each other.

Both Ae-ra and Jung-woo feel betrayed and like their love and efforts in their relationship went unappreciated . This idea is pretty universal and "Sly and Single Again" explores it with honest humor that centers around Ae-ra and Jung-woo's games of one-upmanship. The game is an attempt to ameliorate the pain of divorce, but it only exacerbates it. Revenge goes too far on Jung-woo's part and leaves Ae-ra in tears, but the writing is clear although his behavior is not to be condoned, his motivations and actions are understandable. Ae-ra makes mistakes as well and they are expected to continue because the hijinks must continue!

Ae-ra's family is a weaker point of the show. Her father and older brother spend money carelessly and invest in pyramid schemes and other get-rich-quick ploys that leave Ae-ra and her mother working hard to pay the debts. This storyline is so typical of Korean drama and so typically portrayed that it's wearisome and not one of her family members is interesting enough on his or her own to warrant as much screen time as they receive. Their family story could've just as easily been told with much less time.

What the family scenes do tell us is that Ae-ra comes from a financially unstable family and that fueled her need for stability with Jung-woo. (The father and brother even go to Jung-woo to try and weasel their way back into his good graces now that he's rich.) Jung-woo, however, doesn't seem to understand Ae-ra's point-of-view because he is focused on her emotional betrayal. She, on the other hand, doesn't realize her cruelty during her suffering seriously damaged him.

Onto Yeo-jin who has yet to become truly interesting. She is rich and damaged, but really hasn't had much to do in the drama. Her interactions with Ae-ra are the most interesting scenes she's in because they spur her forward and keep her from wallowing in her past. Her brother, Seung-hyun, on the other hand, is much more interesting. He is intrigued by Ae-ra and helps her succeed as an intern in Jung-woo's company. He hides chaebol status and is inspired to help Ae-ra when she is picked on by her seniors, especially Pi Song-hee ("Lee Hwa-kyum") who has her sights set on winning Jung-woo. Song-hee as a character isn't interesting. She's merely useful in developing Ae-ra and Seung-hyun. It allows Seung-hyun to feel the desire to help Ae-ra - Helping her out is the first step for him to find motivation from within himself.

Secretary Gil continues to be one of the most amusing characters in the show with his snarky commentary and obsession with playing phone games. The language used in the show also indicates that he and Jung-woo have a history. At one point he had a slip of the tongue and instead of calling Jung-woo by his title, " president ", he called him the Korean word for "older brother", which indicates a closer relationship. That relationship was indicated in preview material, but its much better to see the hints in the show itself. Secretary Gil has also fostered an antagonistic relationship with Ae-ra, which means she has hostile relationships with most of the male characters in the show. That provides a base for a whole lot of comedy.

In the end, this show isn't as much about the comedy as it is about these characters coming to terms with their pain and with each other. For now, however, pain spurs our divorced couple on and each new act of revenge hurts them and blinds them further to the other's perspective. The turning point will come when one of them can put himself or herself into the other's shoes.