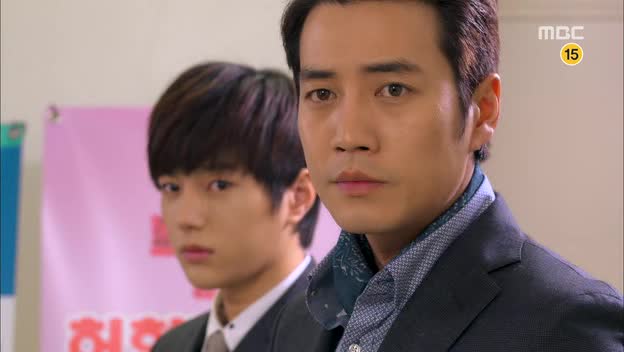 "Sly and Single Again" became more serious this episode, which helped the plot progress. The somber mood allowed for some real communication between Ae-ra and Jung-woo and for some really sweet flashbacks.

The episode starts with the last of Ae-ra's pranks, which backfires and puts her in a sour mood. At this point, neither she nor Jung-woo is open to hearing the other's point-of-view. However, an incident occurs that gives Jung-woo's company trouble and puts Ae-ra at fault via her irresponsible family. Most of the episode is spent taking care of the incident's aftermath. Because of this incident, Jung-woo sees how Ae-ra suffers because of her financial status and because of her family. She sees how competent he now is. It is the first time that they've really stopped to take a look at one another since the divorce and it's eye opening.

What I like is that although the two gain a deeper understanding of each other, there is still defensiveness, and hurt, and irrationality buried there. The understanding isn't a cure-all, but it is a start. It is the impetus for them to begin remembering the good times and the love that was there.

Seung-hyun starts to fall for Ae-ra in earnest because of the same incident. It gives him the opportunity to see her humble herself and also to see how she is with her family, however dysfunctional they may be. He, like most chaebol second leads in Korean dramas, has a cold, uncaring family and turns to his impoverished love for warmth and family bonding. Despite the fact that this trope is used all the time, it's still effective because it's relevant. A good family creates stability and gives support. Seung-hoon is looking for that, as are we all.

As for Yeo-jin, I'm still finding her character and her story cold and unmoving. It's too mechanized and planned out to have any real effect. Yes, her situation is heartbreakingly sad, but it feels contrived and therefore all of her angst and yearning for love feel equally as contrived. Had her entire background story been handled better, it would've made her much more relatable. The only thing making her appealing is her burgeoning crush on Jung-woo. Of course, when she discovers the truth of his relationship with Ae-ra, I fear that she'll become unbearable and ruin the nice vibes of the show.