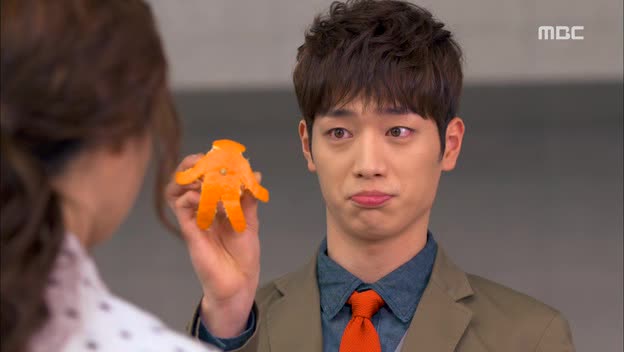 Although some of the reasons the show finds to create tensions in Ae-ra's office are contrived, the results are realistic. Ae-ra ends up being treated as an outcast and the victim of bullying. Situations like that are far too prevalent in the workplace and I like that it is being addressed. Victims are unable to speak out because of lack of confidence and seniority and proof.

Yeo-jin's story is still cold. The show is trying to garner sympathy for her by making jerks treat her like crap because of her leg. It would be more effective if a few flashbacks showed how people treated her different because of her missing leg and how that slowly chipped away at her. I do, however, like how she's handling her knowledge of Ae-ra's and Jung-woo's relationship. Sure, she's a jealous second lead, but she's not yet being obnoxious about it. She's feeling out the situation, which is perfectly plausible.

The talk at the end of the last episode between Ae-ra and Jung-woo has really opened doors for them. They are still petty and bitter, but there is an underlying understanding between them now despite their continuous mishaps. The show sets up so many contrived scenarios to push them together, but the resulting outcomes are usually worth it.

Seung-hyun's primary function is currently to be an adoring puppy trotting after Ae-ra and falling hopelessly in love with her. He's doing quite well and the juxtaposition of how he sees her and how she really is makes for good humor. His relationship with Jung-woo is sweet, but it will inevitably become strained once Ae-ra's relationship with Jung-woo is made known to Seung-hyun. I'd like his role in his family to be developed. Although a troublemaker, he is the one that everyone seems to care for and he is the key to unifying the family or at least to soothing over their troubles. That, however, would require that he take responsibility for something, and he hasn't learned to do that yet. He needs a little bit more time with Ae-ra.

I wish Secretary Gil and Min-young were given more screen time and more development. They are much more interesting than Ae-ra's family and they are completely endearing in how they support Jung-woo and Ae-ra 100% while also keeping them in line when they do foolish things.

The set up for next episode looks to be one that will give us a few laughs, which was the main reason I started watching this drama. Bring back the laughs! Bring on more Ae-ra and Jung-woo mishaps that lead to character growth and some romance!

Added episode 7 for the Korean drama 'Sly and Single Again'