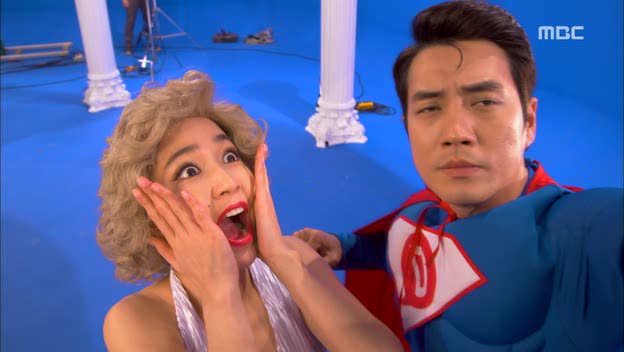 After that conversation at the end of episode 6, Ae-ra and Jung-woo have slowly begun to see each other more clearly. They continue to bicker and misunderstand, but the resolutions are quicker and the empathy that was lacking before is now clearly felt by both sides.

"Sly and Single Again" works very hard to force these two together, and the situations they find themselves in sometimes must be taken with a grain of salt, but those same situations create a lot of comedy and fodder for character growth.

The office gossips are a niggling and annoying presence. Their main role is to get Ae-ra into trouble and they are otherwise useless, 2-D characters who barely make it off the paper. They fuel the gossip mill that the petty rivalries that force Ae-ra and Jung-woo together. They also serve to slowly reveal Seung-hyun's real identity.

Seung-hyun is fighting harder to keep his secret and also watching what is clearly happening between Ae-ra and Jung-woo. He's not sure what it is, but he knows they are close. What I enjoy about this character is that he doesn't like Ae-ra taking the abuse of her co-workers and he tries to help. He's not a completely active hero, but he tries within the confines of his secret. He also acknowledges her as a capable woman who doesn't need saving - he just wants to save her. It's so much nicer than all of the male leads in dramaland who force a woman to be saved by them when they don't want nor need it.

One not-so-secret secret from Ae-ra's past was revealed and it may have been the catalyst for her decision to divroce. I'm waiting for the news to reach Jung-woo. With his father's death, he is really starting to see how his poverty during the years he was married hurt his father and also how much his father encouraged him. Those sentiments should translate to Ae-ra eventually.

Yeo-jin is asserting herself as Jung-woo's " current lover ", or rather " potential lover ", in front of Ae-ra. At this point in time, I can't blame her for doing so and she's easily understandable. It would be better if her backstory was easier to relate to because then I could root for her to find happiness and love. Instead, I find her scenes wearisome. The same goes for her father whose wife has asked for a divorce. If I had seen more paternal affection, I'd pity him more and I'd relate more to his desire to keep his kids. Mostly I've seen Seung-hyun show him affection, which made me like Seung-hyun, not dad, more.

The beginning of the episode had some wonderful moments that played on the Superman and Marilyn Monroe advertisements that Jung-woo's company was shooting. I especially liked the use of the John Williams " Superman Theme. " But this humor is short-lived because thi episode plays towards the Ae-ra/Jung-woo pair selflessly helping each other, and suffering through difficult social situations because of it. This episode really gave them both a chance to see that there really are no hateful feeling that are left. It was an emotional turning point, which leads us into the second half of the drama.