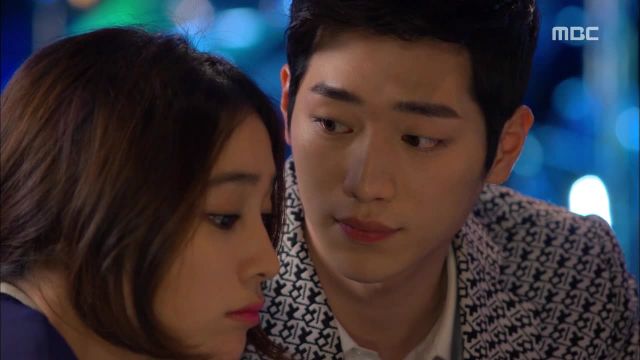 "Sly and Single Again" has brought back the humor as the main couple rediscovers their feelings for each other. It makes this show so much fun. It also has a freshness that is mostly due to the comedy and the sincerity of the second male lead, Gook Seung-hyun.

Seo Kang-joon is playing Seung-hyun with a finesse that belies his age. The role requires nuance in order to show the inner softness of the outwardly whimsical and unconcerned rich boy. It also needs the delicate touch of an actor like Kang-joon in order to make it stand out because it is a role so often seen in Korean drama.

There are still a few useless plot threads, like Min-young and Ae-ra's oppa starting a love line. It's completely unnecessary. There is also a lot of pandering on the part of the office staff that is annoying to watch. If such things are deemed necessary for the plot, their inclusion into scenes should be restricted in terms of time. Or, a heftier work problem should occur, something to do with Ae-ra's inexperience; something that would actually happen.

The workplace drama does highlight Ae-ra's gumption and work ethic. Despite unfair treatment, Ae-ra diligently stays late to complete her work. Both Jung-woo and Seung-hyun see this. It makes Seung-hyun fall for her and enlightens Jung-woo as to how hard she actually did work during their marriage.

Now that we're in the second half of the drama, the normal drama time for a turning point in the story, Ae-ra and Jung-woo have begun to understand each other again. They also are feeling attracted to each other and jealous over time spent with others. After so much fighting, the emotional payoff of watching these scenes as a viewer is huge. Jung-woo sees Ae-ra working hard and feeling happy around Seung-hyun. She sees him as confident despite the fact that he's still hurting from their divorce. Mix in a few jealous antics and this show becomes a lot of fun.

A nice touch is the choice of the writer to keep Jung-woo's original personality: an awkward computer geek. Underneath his expensive clothes and cool exterior lies the original man that Ae-ra married and loved. We see this nerdy side of him most with Secretary Gil. This pairing is one of my favorites and I wish that Kim Myung-soo received more screen time because of it.

acting like falling in love, fallingjinx. mock fight; they are starting to see each ohter. sees how hard she works, what SH likes about her, and his original dorkiness coming out. i like that that hasn't changed. i like that she's less abrasive now. he also sees her sincerity. he sees her more. doesn't like her around SH. sees he was hurting.

"Sly and Single Again" is proving to be a solid romcom as is starts the second half of its run. It's relatable, funny, and endearing. As long as it avoids too much family and work place drama, it will continue to be a solid watch.