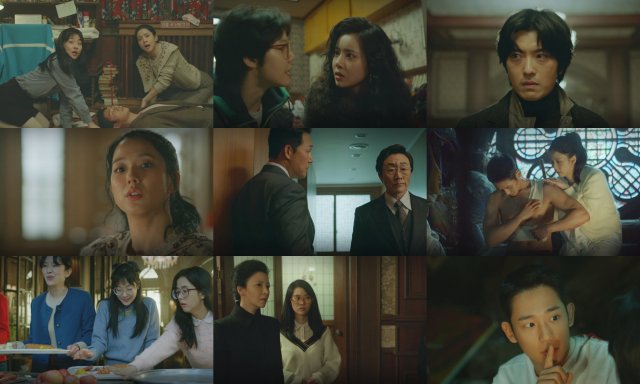 A very pointless opening ten minutes offers almost no new information as we watch last episode's conclusion from Soo-ho's point of view. Soo-ho was doing spy stuff, got chased into the girl's dormitory by South Korean agents, and Head Mother Pi rather comically refuses to cooperate with them even slightly due to the lack of a warrant. It's unclear whether Head Mother Pi sympathizes with Soo-ho's plight.

This is because Soo-ho is presumably a pro-democracy protestor, or if she just hates being told what to do by anyone if they're not following the rules. The critical irony behind that entire premise is the main interesting idea "Snowdrop" has going for it. Soo-ho does indeed appear to be a North Korean spy. But the National Intelligence Service has such a notorious reputation for labeling literally any pro-democracy protestor a North Korean spy that no one believes them.

It occurs neither to Team Leader Lee (played by Jang Seung-jo) nor his main spotlighted subordinate Agent Jang (played by Jung Eugene) that by barging in and waving their guns around they look considerably more dangerous than the alleged terrorist they claim to be trying to arrest. While that whole situation sounds like farce, it doesn't really play like one on-screen. Everything about the illegal ransacking of the dormitory is played for dead serious tension.

I thought there was going to be a silly explanation for the blood in the sauna yet it was just straightforward drama. This even happens in more slapstick scenes, with Yeong-ro's senior roommate Hye-ryeong (played by Jung Shin-hye) playing the shrieking victim in regards to an agent staring at her impromptu hiding space. I like how our at times shrill and annoying leading ladies put this to good effect to try and intimidate the National Intelligence Service agents into giving up their search.

But the novelty wears thin once the agents finally do leave, and we're left with spooky ghost stories and purloined food as the backdrop to Yeong-ro and Soo-ho's burgeoning love story. We still know almost nothing about Soo-ho, or even Yeong-ro for that matter, as their motivation is underdeveloped compared to the gigantic cast of politically aligned characters I'm still having trouble keeping track of. Well, the music is at least really good. I like how we actually get to hear entire songs. It really sets the mood for the music of the era, even if this aspect comes at the expense of robust editing.