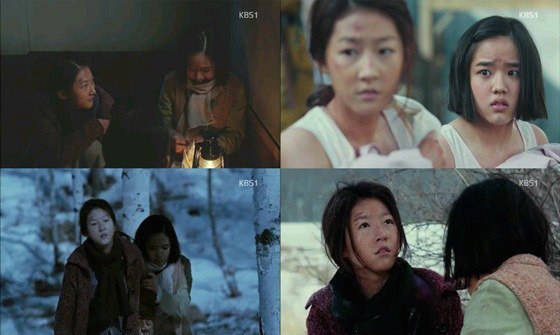 We find out here that the ultimate point of "Snowy Road" was for Jong-boon to give Eun-soo the strength to move forward by reliving her own awful experience at the camps. In many ways the situation was so horrific as to be inexplicable, and Eun-soo raises an excellent question. Why should Jong-boon feel ashamed about what happened, when the whole situation was the fault of the Japanese? Jong-boon's dry replies soon demonstrate that Eun-soo was missing the point. The shame, and the cure for the shame, lies less in Jong-boon's situation as it does the nature of the human condition.

Consider Yeong-ae. She had a life. A future, and that was all taken away. It's little no wonder she tried to kill herself. The more surprising facet of the experience is why Yeong-ae chose to live- to put it simply, Yeong-ae realizes here that she is not alone. Yeong-ae has friends, sisters in the camp. They can cope. As miserable as everything else may seem, they can try to cope, and survive. It's not much, but as long as they have each other, they can face the future.

"Snowy Road" has, in the end, come up with a disquieting moral of just lowering expectations. We see that it's this struggle of camaraderie against horror that's given Jong-boon the strength she needs to do the right thing in the modern day. Consider the twin pictures we see on her desk at the end. Jong-boon can not, and will not, run away from her past. She is the one who lived, and Jong-boon owes it to her friends to do what she can as long as she can.

It's this tragic air that ultimately surrounds Jong-boon's escape from the camp. This is no moment of heroism, but the same grim realization of horror that's defined most of the narrative. Even Jong-boon's homecoming is, unsurprisingly, a dispiriting one. But the young woman clutches on to her memories. The bleak, white trail that has made up Jong-boon's existence is pictured perfectly here. Whatever happens, Jong-boon has to see this journey through to the end.

As a memorial, "Snowy Road" is poignant. Kim Hyang-gi and Kim Sae-ron sparkle as they give legacy to the struggle of the comfort women- who themselves were just young girls, not the wizened old women we see today. Director Lee Na-jeong, too, brilliantly realizes a winter landscape that's an apt, distressing metaphor for life that must be lived for the sake of living. As Jong-boon admits, this isn't much to go on. But it's enough.