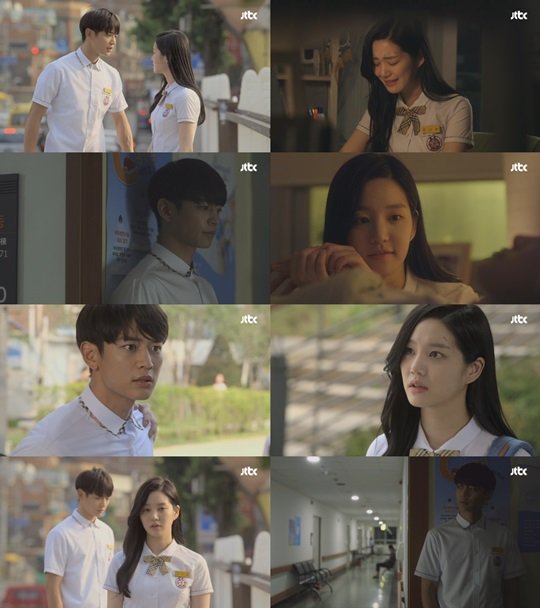 We get some badly needed insight into what is going on with Na-bi in this sampling of "Somehow 18", and right away her story comes off as far more compelling than Kyeong-hwi's. It is a tad melodramatic, granted, but Na-bi's early death had to have some sort of explanation that would inevitably be at odds with the cool girl persona she always presented around Kyeong-hwi.

That Kyeong-hwi would not be aware of any of this information, even after the passage of ten years, is also quite plausible. To Kyeong-hwi, Na-bi has always been this noble heroic figure who saved his life. It's one thing to commiserate her death over a round of beers. It's quite another to actually want to delve into what happened because why ruin the legend? It's what made Na-bi's presence in Kyeong-whi's life so powerful in the first place.

Unfortunately Na-bi's story is so good that she kind of accidentally brings down the rest of the drama by comparison. I'm already getting a little tired of the bullies. Sometimes their antics are cute, but there's only so many times Kyeong-hwi can pull one over on them before "Somehow 18" starts taking on explicit elements of wish fulfillment. At some point you'd think they'd realize bullying Kyeong-hwi is more trouble than it's worth. Which they do sort of figure out.

The bullies are more interesting when they have an actual reason to bully. It doesn't have to be a good reason- they're going after nerds on general principle just makes more sense than holding a grudge on general principle. Otherwise all the bullying and comeuppance just leaves me thinking, where are all the teachers at this school? Have we ever seen any? I mean, there is the school nurse. Who's great, don't get me wrong, her reaction shots are wonderful. But uh, the fact that she's always just trying to get a nap is a bit disconcerting.

The whole time travel aspect of the story is another weakness. I hadn't put much thought into the technical questions of how the rules actually worked, since "Somehow 18" is less about the rules and where the time travel comes from as it is just about the character relationships, which is where the focus really should be. And most of the time it is because those hospital scenes….yikes. That's some pretty emotionally heavy stuff right there, considering how everything is supposed to go down later on.