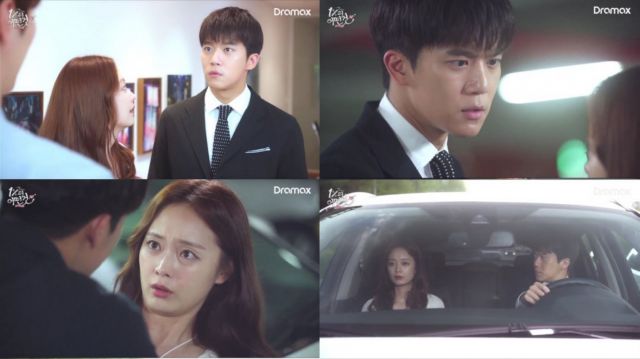 Jae-in is a bit of a jerk, and oddly enough, I'm actually mostly all right with that. Mainly this is just a matter of the guy not being all that malicious. Jae-in treats Da-hyeon the same way he treats most people in his life, and at minimum this does give him some credit for consistency. There's an odd sort of philosophical quality to Jae-in's conversations with Da-hyeon, where they're talking about the abstract quantity of dating rather than each other.

It's a nice self-analytical touch to a storyline that's about as generally well-worn as possible. The production team for "Something About 1% - 2016" is very good about being able to maintain an effective veneer of freshness. I've even managed to come around to the half-hour episode format- it helps prevent the drama from being overly repetitive, and clearly bookends each episode around a particular level up in intimacy.

The fourth episode, for example, finally makes it clear that Da-hyeon will remain in the same room as Jae-in even if he's being a jerk all the time. This is good, because it rids the drama of all these legalese scenes where Da-hyeon unsuccessfully tries to move the story forward. It also creates the important dynamic of Da-hyeon reacting to Jae-in's hostility by snapping at him with his own brand of aggressive rudeness, as compared to Da-hyeon's much less entertaining passive-aggressive rudeness.

This leads up to the main progress of the fifth episode, where Jae-in starts to warm up to Da-hyeon precisely because she's being honest with him. The elevator scene perfectly encapulsates this sentiment, as it features Jae-in saying mean things about Da-hyeon with a smiling, joyful face. Jae-in doesn't particularly like Da-hyeon from an abstract perspective, but he does like the way he feels when Da-hyeon is around. Their personality clash is frustrating, yet also consistently fairly satisfying.

It's almost enough to make me think that Gyoo-cheol's convoluted plan to turn Jae-in into a worthy heir is coming from a sound logical place. Unfortunately every little hint we get about Jae-in's backstory indicates that his family and business lives have been chronically dysfunctional. Which does, admittedly, explain why Jae-in himself is so generally ignorant when he's perfectly capable of sending and receiving effective communication. As for what Da-hyeon is getting out of this whole arrangement, well, she is a teacher. It stands to reason that Da-hyeon really does just like teaching stuff.

"[HanCinema's Drama Review] "Something About 1% - 2016" Episodes 4-5"
by HanCinema is licensed under a Creative Commons Attribution-Share Alike 3.0 Unported License.