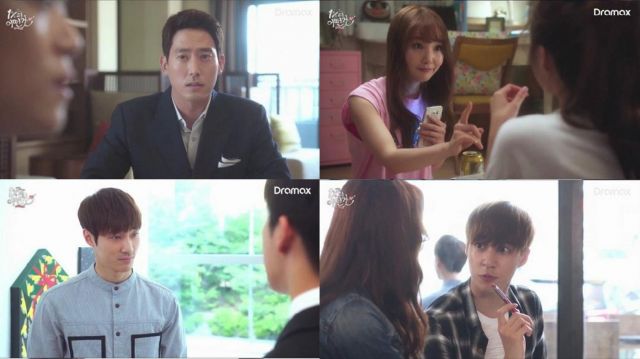 Jae-in and Da-hyeon are constantly pushing at each other's boundaries. Generally speaking they do this for the sake of being belligerent. Da-hyeon's weird insistence on being sexy at the start, for example, has little to do with an actual desire on her part to feel sexy and everything to do with intentionally and borderline maliciously teasing Jae-in's expectations, as a sort of contrarianism. It's surprisingly easy to sympathize with Jae-in even as he acts somewhat misogynist.

But the second portion of the sixth episode adds a new dynamic, as Jae-in accidentally slights Da-hyeon, and precisely because what he did was uninintentional, Jae-in ends up going into a massive guilt trip. Which manages to turn all the way around once again because Da-hyeon actually ends up feeling sorry for Jae-in. More specifically, Da-hyeon feels sorry for the parts of Jae-in's personality and circumstances which compel the man to act in such an obsessive, controlling manner.

So how to get Jae-in to move past that? Well, Da-hyeon just talks to him about it. How amazing a solution can seem when arrived at so simply. Even when just talking about sleep Jae-in proves surprisingly receptive to Da-hyeon, like he's willing to entertain the possibility that she's right simply because sleeping more often is not an idea he has ever tried before because it hasn't seemed all that important up until that point.

We're also seeing slow but steady changes in the way Jae-in acts at the workplace, or with his family. Jae-in's priorities in life are changing, not necessarily to Da-hyeon, but more generically in the direction of thinking about what he wants, rather than what would be ideal measured against some sort of hyper-abstract ideal Jae-in is still a fairly rude person, but he's making an effort to only return that attitude to people who show that to him to start out with.

This unfortunately doesn't leave very much for Da-hyeon to do except give Jae-in a makeover, though, which I found to be a little disappointing. Aside from desperately wanting to insure that Ji-soo has clear career path in lif Jae-in doesn't really seem to want anything for herself. Although she does at least get the little moments. Consider how Da-hyeon reaches that ever important relationship milestone- feeling like it's necessary to say she has a boyfriend, not for the sake of showing off, but because it's contextually relevant.

"[HanCinema's Drama Review] "Something About 1% - 2016" Episodes 6-7"
by HanCinema is licensed under a Creative Commons Attribution-Share Alike 3.0 Unported License.