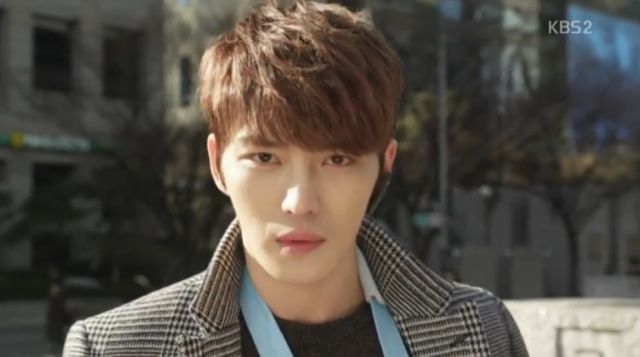 The set design for "Spy - Drama" feels kind of...off. Take the very first scene. It took me a minute to figure out this event was taking place in China. But even after that point the place just looked kind of oddly dirty and clean at the same time. No litter or trash or graffiti anywhere. And yet it was exactly the kind of random dingy alley where you'd expect sneaky spy antics to go down. Perhaps this unsettling cleanness was part of the point, given how we soon see the entire situation was staged.

The same odd sense of aesthetic is present in the home life of our lead characters. Seon-woo (played by Kim Jae-joong) lives his mom Hye-rim (played by Bae Jong-ok), dad Woo-seok (played by Jung Won-joong), and sister Yeong-seo (played by Lee Ha-eun-I). Their house looks like some sort of weird antique window to the past- the feeling you get from visiting your grandmother. Everything looks really vintage and wooden. And they have dinner at a square table- nobody's sitting at the head or on the floor.

...I'm probably not selling this very well am I? The awkward feel of "Spy - Drama" really has to be seen to be accurately understood. The aesthetic feels Korean, but not really. In terms of dramas, "Stranger" is the only other one that comes close- but even there we only saw the North Korean decor pattern for a few scenes. In "Spy - Drama" the backdrop is a constantly recurring element that seems to strongly hint at some form of artifical construction.

The bad news, as you may have guessed, is that in my opinion, the set design is by far the most interesting part of the drama so far. The characters are much less interesting. Truthfully, I was less interested in Seon-woo as I was trying to figure out where I'd seen Kim Jae-joong before. For those who don't want to look it up- he was the lead character in "Triangle - Drama". Yeah, easy to see how that slipped my memory.

For what it's worth, as of yet "Spy - Drama" isn't really bad in any particularly obvious way. It's just sort of bland. A needed jolt of excitement appears in the form of a mysterious release, extraction, and subsequent chase in typical spy thriller fashion. If nothing else "Spy - Drama" is managing to satisfy the minimum genre requirements. But we're really going to need something more memorable than set design at some point.