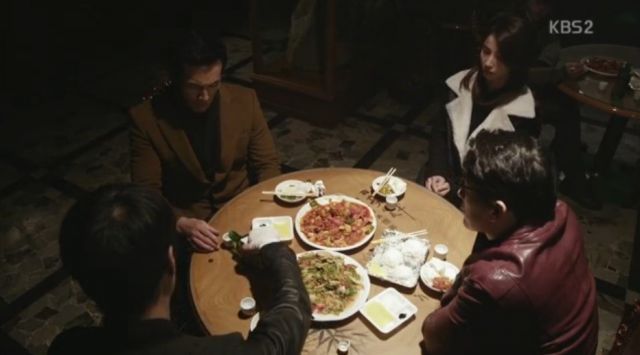 The focus still remains on Seon-woo, although perhaps not quite as emotionally. The episode is bookended by confrontations with Gi-cheol, and it's surprising how unintimidating Gi-cheol seems when faced by Seon-woo, even though the older spy acts the same with Seon-woo as he does with everyone else. The chief problem is that Gi-cheol is used to dealing with people who can be reasoned with. Seon-woo, as much as he tries to hide it, is pretty clearly freaked out about everything he's learned.

This puts his relationship with Yoon-jin in sharp relief. Ironically, it seems like the main reason he can connect and rely on Yoon-jin so well is precisely because Yoon-jin does not act like a spy. Hye-rim does, which is a big reason why Seon-woo was unable to believe in her innocence even in the face of weak evidence. It's just such an obvious explanation for the woman's unquestionable paranoia.

A pity that the romance between Seon-woo and Yoon-jin isn't a bit more compelling, because it's really the main part of the story right now that has tension. Can their relationship, assuming there even is a real relationship, survive the inevitable discovery that Yoon-jin herself is a spy? While it's easy enough to feel pity for her, no one else is directly privy to Yoon-jin's private emotional recriminations.

Gi-cheol also somewhat suffers here from the fact that his plan is getting into more dubious practical territory, to the point that his effectiveness as a villain may well nearly be scuttled. This might in fact be the point of the cliffhanger- that you really need only one stupid miscalculation to be completely knocked off. And the general ambiguity of the situation, to the point that I genuinely have no idea which way the next episode is going to go, does a lot to sell that.

"Spy - Drama" really has to be understood primarily as a deliberative drama. In this case Seon-woo takes a long hard time to ponder over what he should do- to the point that even explicit confessions are of little help in convincing him to take decisive action one way or the other. So too, do we have to stop and think before being rash. This is a common viewer identification element in melodramas and "Spy - Drama" once again manages a deft merging of the two forms to give a real personal element to a backstabbing genre that normally seems all too transparent.