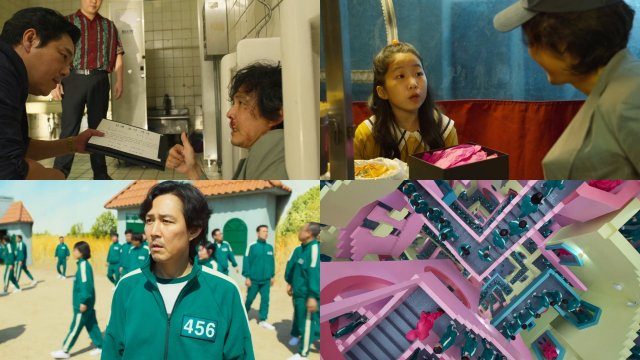 Ki-hoon (played by Lee Jung-jae) is a genuinely unpleasant person. We're introduced to the forty-something man as he attempts to badger his elderly mother for extra money to satisfy his young daughter's rather modest desires for a happy birthday with her dad. We then proceed to watch Ki-hoon squander his fortunes in increasingly stupid ways. The message is clearly communicated. Ki-hoon is an idiot, who doesn't know how or when to quit. This is how he is predictably drawn into the "Squid Game" in a feeble attempt to repair his shattered life.

"Squid Game" has a lot to set up but as of the first episode it's lacking much in the way of an obvious point. "The Devil Judge" for all the flaws that became more glaring as time went on, at least started with clear satirical undertones. But with "Squid Game" Ki-hoon is such a genuinely repugnant person it's honestly difficult to care whether or not he succeeds. The purpose of the "Squid Game" itself is likewise shrouded in such deliberate mystery there's nothing to do but...watch more of the drama I guess.

Nevertheless, "Squid Game" has its positives. The story is deliberately and absurdly about people volunteering to participate in a life-or-death struggle to succeed in traditional Korean children's games for a possibly gigantic payoff. I could tell you that the first challenge is Blooming Flowers, and while this is technically a spoiler, I think it's reasonable to assume you have no idea what I'm talking about. For an internationally released Netflix production, "Squid Game" is a lot more inscrutable than you'd think.

But that's only true in the sense of the specific children's games presented in the plot. Everything else is really straightforward, despite pretenses at edginess by introducing brand new characters who are repulsive in ways completely different than the ones we already have. Indeed, I'm interested in Ki-hoon as a person less because of his motive but because he's an obvious underdog.

On two separate occasions during Blooming Flowers, Ki-hoon's life is selflessly saved by other characters who gain no immediate benefit from doing so. While I disliked "Squid Game" at first I had to admit that by the end that I was at least curious about what was going to happen next. If nothing else "Squid Game" is delivering on its basic promises- whether it can exceed those expectations and offer a genuinely innovative story is as yet unknown.