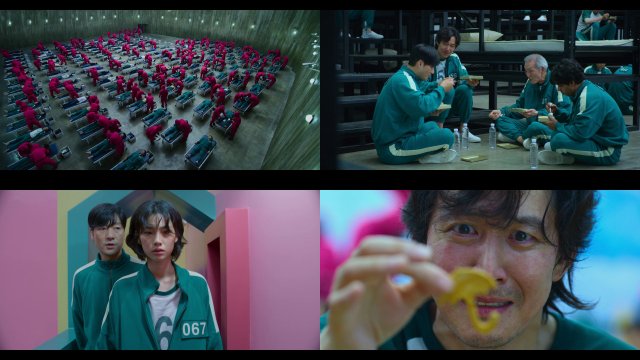 Joon-ho (played by Wi Ha-joon) is a cop on the trail of his missing brother. By coincidence, he learned that Ki-hoon was in possession of the same non-functional business card that was discovered in his brother's dormitory room. Following Ki-hoon's predictable disinterest in cooperation, Joon-ho tracks Ki-hoon down to the the location of the game. From there he remains an only intermittent presence, as focus shifts back to the players.

Also predictably, as usual, Ki-hoon tries to make a team between himself and the other three guys he sort of knows. Similarly predictably, the team is not of much use in the second game. From everything we've seen so far, theoretically no one actually has to lose these games. The victory conditions are defined on an individual level. I'm a bit disappointed by the lack of game theory in "Squid Game" given that the main hook is about people struggling to find winning strategies in absurd games with outrageously high stakes.

Social elements elsewhere fare a bit better. Mi-nyeo (played by Kim Joo-ryung) ends up having a more important part than we were led to believe. Again I'm not sure if that's her actual name or just a nickname, since in common Korean it means beautiful woman. Anyway, Mi-nyeo is the first character with repulsive character flaws to actually be kind of intriguing. She is friendly, aggressive, and sneaky in wild swings. Mi-nyeo is definitely a character of above-average intelligence but unfortunately she uses that intelligence to further some very stupid goals.

Contrast Sae-byeok, who's more straightforwardly competent but considerably more boring. We're led to believe that, in comparison to other contestants anyway, Sae-byeok is actually quite smart and was just dealt a bad hand in life thanks to being a North Korean defector. This is what I mean about more cliched character moments. It's not that the characterization is bad or even unnecessary. The issue is that most of our characters are ciphers at best.

"Squid Game" continually expects us to trust that there's actually a point to all this distorted imagery, and that sooner or later we will get an explanation for what the "Squid Game" is and why the front man would go to such comically extreme efforts to keep it running. I remain ambivalent about whether payoff will be worth the buildup. But in the here and now at least, the drama is certainly engaging enough that I'm curious about what will happen next.