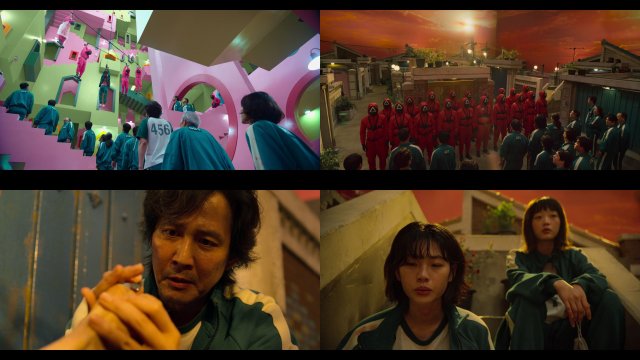 If you were hoping for more backstory revelations regarding Joon-ho's trip to the archives, none are forthcoming. "Squid Game" can only just barely be bothered to acknowledge that Joon-ho is lurking about in the background at all as the fourth game is underway for the entirity of this episode. Somewhat hilariously, a phone call appears to imply that the front man knows an interloper is in the midst, but is choosing to prioritize the time schedule instead for the sake of the nebulous VIPs.

It's pretty clear that whatever the actual purpose of the "Squid Game" may be, the front man sincerely believes in their philosophical underpinnings, and how the competition is meant to be a demonstration of fairness. This rather farcically contrasts with the actual content of the games themselves. Misogynistic assumptions having been rewarded in the third game, it's unsurprising that they only intensify in the fourth one.

At this point I'm bothered less by the questionable game theory in "Squid Game" as I am the incoherent spiritual logic. A major component of the fourth game is that players have to negotiate rules with each other. The triangle guards are the implied referees of these rules- but we already know they're meatheads who are strongly discouraged from ever speaking. So it's not particularly surprising that in any given rules dispute they just take the path of least resistance.

But this episode is less about the rules as it is the emotional attachment we have to the characters, as multiple named roles meet an unfortunate fate. I wasn't particularly moved, since as always they're just broad archetypes being forced to brutally kill each other for a payout. The winners feel bad. They even cry. Yet such crocodile tears are quickly getting to be unconvincing, especially since as far as I know the whole "end the games by democratic vote" rule is still in effect and may yet come up again.

It probably won't, or more accurately shouldn't, since Joon-ho's trip to the archives implies that the games always have winners. In general Joon-ho remains the most dynamic character, or at least the only one who can plausibly affect change, because everyone else is just locked into grim fatalism. Even Joon-ho's own brother, an apparent winner from six years prior who somehow returned to financial insolvency, is better at begging intriguing questions than the game's actual participants.