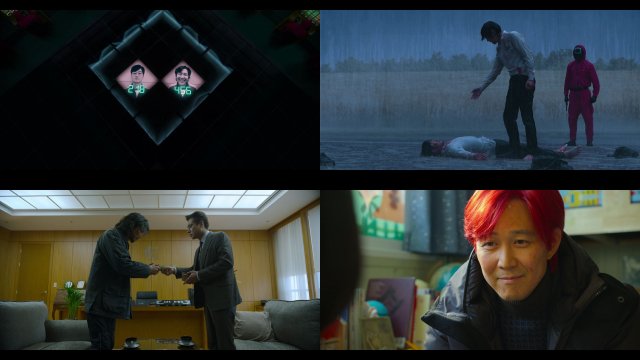 As expected, the final game of the "Squid Game" is the "Squid Game" detailed in the first episode. I have been calling the overall game by that moniker because the overall competition doesn't appear to actually have a name, and I have to call it something. But anyway, the rules of that game, which I couldn't really follow when it was first introduced, don't actually matter here as the contest almost immediately devolves into a knifefight between Ki-hoon and Sang-woo.

So the game theory is weak, yet again. But I'm mostly past that particular criticism at this point. And I also have to begrudgingly give "Squid Game" some credit. The end the game by majority vote rule is mentioned again at length to criticize Ki-hoon's character. The critique is weak and unconvincing, and Ki-hoon is still mostly presented heroically at the episode's end, but all the same, the critique does exist.

Which fairly neatly encapsulates most of my issues with "Squid Game" as social commentary. While writer/director Hwang Dong-hyuk is clearly familiar with the concept of economic coercion, he just as clearly doesn't understand that it's a systemic problem, not one of individual choice. A huge chunk of the runtime here is devoted to a heavy-handed and generally pointless ethical dilemma. By accepting the premise of the bet at all rather than just callling the police himself, Ki-hoon validates the moral hazard theory of the "Squid Game" even though he overtly describes it as despicable and wrong.

And why is it the police at all, rather than paramedics? For all his apparent distaste of the capitalist state, writer/director Hwang Dong-hyuk abhors alternatives. A brief, inaccurate line about Chinese personal debt, coupled with the earlier plot point about the Chinese buying illegal black market organs, marks the world's chief non-capitalist power as even worse. Sae-byeok's identity as a North Korean defector unsubtly reminds us that people are worse off in the other non-capitalist Korea.

Then there's the plane to America, as if we don't have identical problems. All of this works to make the greater anticapitalist critique of "Squid Game" almost entirely toothless following any serious analysis. Strong production values, distinctive visuals, and good performances have gotten "Squid Game" far in the pop culture zeitgeist, and it's a logical choice for the first number one worldwide South Korean hit for Netflix. Nevertheless, I am unimpressed with the messaging, and am confident this drama won't stand the test of time.